Everybody in the Pool!

As temperatures peak and the sun’s ultraviolet assault heightens, cool and refreshing pastimes are a natural pursuit for families looking to beat the heat, and none of them satisfy that need quite like a trip to the pool. But while most are content to splash around in the water or sprawl by the poolside with an ice cold drink, there are those individuals who find such fulfillment in a forceful front crawl that they are compelled to compete.

After nearly 40 years of immersion in the world of competitive swimming, Mike Davidson still finds himself growing more passionate for the sport year-after-year. He has a prolific coaching record, including heading the outstanding Solon STARS Swim Club for 15 years, but since 2017 he’s been the Aquatics Director at C.T. Branin Natatorium at McKinley High School and Head Coach of the Canton City Schools swim team. We sat down with him for a discussion that ran the gamut from national competitions to Olympic alumni to community and youth programs at the Natatorium.

A colossal renovation project recently concluded at the iconic C.T. Branin Natatorium, host of the Ohio High School State Swimming Championships for the past 45 years. The $3.2 million overhaul of the historic facility, named for McKinley High School’s renowned head coach, included the installation of an overflow gutter system on the pool itself to improve water circulation and cut down on race interference. The renovation also included a beautifully resurfaced seating area, updates to offices, locker rooms and bathrooms, and a state-of-the-art HVAC system for optimal environment. Mike explains that a sizable portion of funding went into a water filtration system capable of circulating 1,200 gallons of water per minute. This translates to refreshing the entire contents of the pool more than three times daily, which does wonders for improving water clarity and minimizing chlorine odors. With a generous grant from the Timken Foundation to help put the finishing touches on the project, Mike says this premiere Ohio facility should be in excellent shape for another 45 years.

“We really want to showcase it and make people understand that all things related to swimming, diving, and the aquatic environment in general are offered at C.T. Branin Natatorium.”

The programs offered are truly diverse. Among them is the popular Learn-to-Swim program, teaching young children swimming and water safety. There are lifeguard classes and recertifications available in the spring. The Hall of Fame Diving Academy uses the facility to instruct competitive divers, and Special Olympians hold training there. A US Artistic Swim Camp for synchronized swimming is planned for this fall. Plus, the natatorium is working with the Visitors Bureau to bring in more national organizations. There are regular open swims for patrons to come in and do laps, as well as recreational swims which are aimed more at fun in the pool.

“If there’s time to rent out the facility or make it available to special interest groups, we do that. We really try to give every organization interested in using the natatorium an opportunity to get in here.”

Mike emphasizes that one of the most important things considered in the functionality of the natatorium is making quality programming accessible to all. Enrollment is available to everyone, not just Canton residents, though they intend to bring back the free Canton City School Safe Summer program for Cantonians. It’s been a great success in the past, drawing nearly 1200 participants on top of paid lessons.

C.T. Branin is also home to the Canton City Schools (CCS) Swim Team, a local competitive swimming group that offers high-tier instruction for individuals of all ages and skill levels. With Mike at the helm as head coach, CCS Swim Team encourages self-discipline and self-motivation to help the youths in the program grow into adults capable of navigating life’s demands. Mike’s coaching philosophy starts with instilling a shared lifelong zeal for swimming and helping kids have fun learning to swim competitively. He lays a well-rounded foundation with instruction in the four strokes (front crawl, breaststroke, backstroke and butterfly) and aerobic training. Building from there, each swimmer develops into their own specific abilities, be that as a sprinter, a distance swimmer, or an individual medley swimmer. Mike wants the CSS Swim Team’s staff to help each child reach their full potential, both in the pool and in their own lives.

The program draws participants from all over Ohio. Tryouts for kids with no prior competitive swimming experience will be held on Saturday, Sept. 4. Swimmers from as far as Dover, Perry Township, and Columbiana County have made the commitment to be a part of the team, which produces strong competitors at every level. In July 2021 alone, the CCS Swim Team had entrants in the entry-level national USA Swimming Central Zone Sectional meet, the 14 and under Lake Erie Junior Olympics, the USA Futures meet and Senior Championships. Their consistent performance and values have earned them a spot among the top 100 USA swimming teams for the last two years and the top 200 for the last three years. The CSS Swim Team has also transitioned many elite swimmers to college teams like NC State University, Arizona State University and Ohio State University. One such swimmer is Olympian, Hunter Armstrong.

Just a few short years ago, few would have guessed that Hunter would end up where he is at the time of this interview, training with the US Olympic Team in Hawaii for the Tokyo Olympics. Mike recalls a period shortly after he began coaching the CCS Swim Team where it seemed as if Hunter wouldn’t be continuing at all. He had other interests and Mike’s unfamiliar coaching style had perhaps caused some friction.

“After a frank conversation with his dad, Ryan, about my expectations and Hunter’s potential, he said he’d be back after completing prior commitments with the choir and theater. I said if he came back that Monday I’d know he was serious and I tell you what, he came back and he never missed.”

Mike recounts Hunter’s incredible trajectory from late bloomer to A-list athlete, starting in 2018 when he qualified for the Summer Junior Nationals. After a strong short course season, landing state runner-up in the 50-meter and 100-meter freestyle events, he performed well at the 2019 Senior Nationals and won three events at the Junior Nationals, including setting a meet record in the 100 meter backstroke. Those swims allowed him to be elected to the US Junior Team, and later he achieved Olympic Trial cuts for the same three events; the 50 free, the 100 free and the 100 back.

“He and CCS teammate Chris O’Connor from North Canton Hoover took first and second place at the Junior Nationals which doesn’t happen very often. Our whole team did really well; it was a pretty magical season,” says Mike.

Hunter followed his older brother to West Virginia University where he had a successful freshman year, but it wasn’t the program he was looking for. When he reached out to his past coach, Mike connected him with Ohio State University Director of Swimming and Diving, Bill Dorenkott and Hunter transferred to OSU his sophomore year. Then a global pandemic complicated the situation.

With shutdowns and restrictions going into and out of effect, communication between OSU staff, Hunter and Mike became critical to preparing the athlete for a strong season. As OSU facilities closed, Hunter returned to Canton to train at his home pool with Mike through June and July of 2020 and periodically as further closures demanded.

“We worked together to make sure Hunter was not missing the work that was necessary for him to be the best he could be, especially with all those roadblocks in the way,” says Mike.

With no interruptions in his training, Hunter was able to pull off a tremendous sophomore year. He set multiple school records, he won the 100 back at the TYR Pro meet at IUPUI in Indianapolis against Matt Grevers and other highly ranked US National Team members and it all culminated with an incredible Olympic Trial. A rocky start put him in seventh place at the halfway mark of the 100-meter backstroke, but a spectacular recovery at faster-than-world-record pace secured him a second-place finish behind three-time Olympic gold medalist Ryan Murphy and a place on the American Olympic Team. Mike agrees that Hunter’s four-year ascent from an above average CCS Swim Team member to a top-tier national athlete is nothing short of meteoric.

“It’s the kind of story that you just don’t see happen. To be honest with you, I think he’s just scratching the surface.”

The next Hunter Armstrong could be refining their turns at the natatorium right now. They could be doing laps during open swim alongside people of all ages or they could be taking their first paddles through the water with floaties around their arms, parents looking on with concern and pride. The C.T. Branin Natatorium and the CCS Swim Team have something for swimmers of every ability and interest. 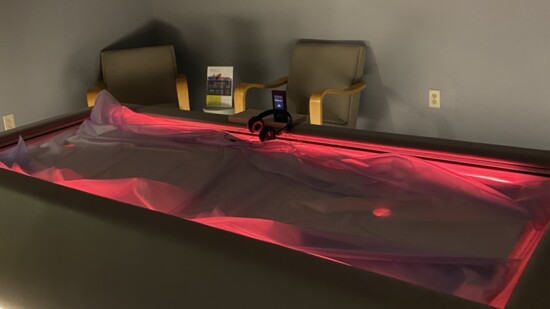