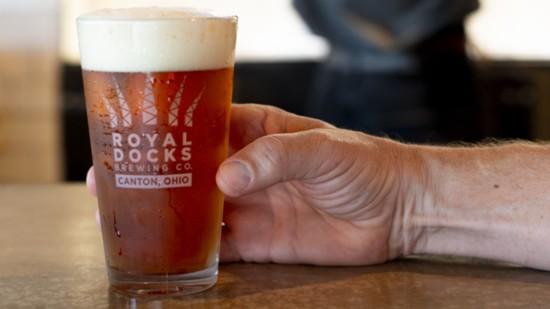 Royal Docks Brewing Company Owner John Bikis’ vision for Foeder House + Kitchen wasn’t to just create a pit stop between work and home. Rather, he sees it as a place to settle in for an enjoyable afternoon or evening. “Our intention was to develop a ‘community living room,’” says Bikis. “Our patio, dining room and bar are comfortable spaces for having dinner and drinks with family and friends.”

Since opening the doors June 12th, FH+K has quickly duplicated the Hausgeschmack, German for “house flavor,” that has made their Jackson Township Taproom + Kitchen a success.  Bikis notes the new spot has a different feel while keeping some of the same flair as the original location. “We brought a little of the Royal Docks culture, décor, menu items and employees,” says Bikis. “But ultimately Foeder House is its own unique experience.”

Located next to The Bistro in the Oakwood Square plaza, the exterior patio features pleasant lighting and an inviting central fire pit. The interior is spacious, clean and modern with large garage doors which, when open, blur the line between interior and exterior. Both spaces are perfect for relaxing with your beverage of choice and a delicious bite to eat.

Executive Chef Heather Reahm has crafted a menu that balances shareable “nibbles” with individually portioned “main fare.” Some of the most popular entrees include beer battered fish ‘n chips ($11.5) and the chargrilled Vlad burger ($13). “The fried deviled eggs ($8) is already a signature dish of the Foeder House,” says Reahm. “The bone marrow ($10.5), pork belly ($10) and lamb lollipops ($14) have also become fan favorites.”

When designing the menu, the Royal Docks team scouted the local area and focused on carving out a niche in the marketplace. According to Bikis, the menu is eclectic without going over-the-top. It’s crave-able with plenty of items you want to come back for again and again.

At its core, Royal Docks Brewing Company is still all about craft beer. It was five years ago this summer when they burst on the scene with a Best in Show win at a local festival. Three years later they won a prestigious Gold Medal at the Great American Beer Festival for the Pendragon Witbier (wheat beer).

While hoppy, IPA-style brews generally sell the best, and the industry is seeing a trend toward brewing lighter beers, Foeder House offers a wide variety of craft beers. It even sets itself apart with beers that mature onsite in the namesake “foeder” (pronounced FOOD-er) barrels which are the focal point of the dining room. “The beers we mature in the foeders are designed to lay down for up to a year,” says Bikis. “They will impart a more rounded, refined and sophisticated flavor profile.” In addition to the craft beers poured from 14 taps behind the expansive bar, all the beverage bases are covered with a full line-up of wine and top-shelf spirits.

The combination of quality craft brews, eclectic but approachable menu and welcoming atmosphere create an experience that was missing in the area until now.