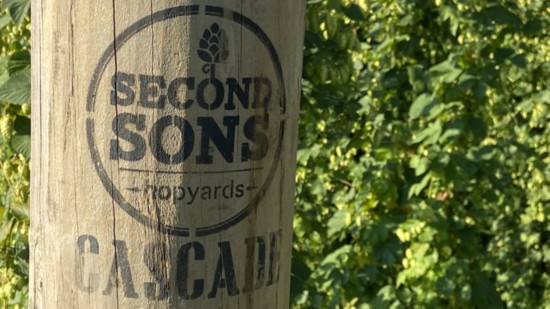 a. Family, friends and a brewer band together for annual harvest of 2,300+ lbs of fresh hops

Smell. Sip. Smile. The folks at Second Sons Hopyards won’t let most people leave without doing all of these things on their annual hops harvest day.

After an 8 a.m. start, the multi-generational group of family members and a few close friends get organized with various machinery and find a steady groove by mid-morning. The citrusy smell of fresh hop cones throughout the yard overwhelms the senses in the best way possible.

Co-founder Kevin Rice cracks open one of the soft, green pine-cone-like flowers to show off the lupulin oil inside, used to create flavors and aromas in a beer. Not far from the harvester machine are three small specialty kegs from Royal Docks Brewing Company. The team seems as concerned about making sure everyone samples the India pale ale (IPA) as they do about the actual harvesting work. It’s the kind of hospitality that makes anyone smile.

Rewind to 2014, when Rice’s longtime friend, Mike Schiltz, had pretty much retired from the videography business and was looking for something new to sink his teeth into. The pair – alongside Kevin’s brother, Bryan – had enjoyed their share of craft beer, and discovered that people were starting to grow hops in the buckeye state.

“One hundred years ago, people grew a ton of hops in Ohio,” says Schiltz. “But a persistent powdery mildew, insect issues and Prohibition halted all growing in the Midwest.”

The Rices happen to know a little something about horticulture. They’re third-generation owners of Rice’s Landscapes Redefined, which previously operated a nursery and retail garden center before transitioning the business to focus on landscapes.

With plenty of space to spare at their then tree farm in Marlboro Township, the trio started about 500 plants across a half-acre.

“We started growing hops because we thought it would be fun to sell to brewers, but not to brew ourselves,” says Kevin Rice. “Brewers like the cascade variety we grow because of the aroma and taste profile, and it grows well here.”

Second Sons was among the first 12 commercial hops growers in Ohio. Today there are more than 100. About 98 percent of U.S. hops grow in the Pacific Northwest because they prefer the cooler climate.

Now, six harvests later, this hopyard yields 2,300 - 2,500 pounds of fresh hops each year. Even though there’s a huge demand for more of the locally grown crop, the Second Sons team plans to enjoy the hopyard as a hobby rather than expand it as a business venture.

“We enjoy the partnership with local brewmasters like Dave Sutula of Royal Docks,” says Bryan Rice. “Dave likes using local ingredients, and he’ll get all of the hops we harvest this year.”

The brewer brought out about 12 members of its team on harvest day to witness the process and better appreciate the work that goes into the hops.

The collaborative effort is definitely a lot of work, but there is some fun involved. Bryan cooks lunch on the smoker for everyone on-site and his father, Tom, provides much of the entertainment as the self-proclaimed “water boy.”

“This is all just an excuse to get out and do something together,” says Schiltz. “Then we can sit down with a pint and know that all the work we did throughout the year makes for a quality beer.”

The process starts by cutting down 20-foot tall stems, called bines, from the hopyard. The team stacks the bines in a wagon and delivers them to the harvester machine. Bines are tied to a suspended conveyor belt and pulled into the machine one at a time. It separates the hop cones from the bines and they fall into collection tubs. The team loads large pallets of hops immediately onto a refrigerated truck bound for a processing plant in Wadsworth. This cycle continues throughout the day until the entire yard is empty.

At the processing plant, the hops get dried and pelletized like guinea pig food and placed in large commercial grade ziplock bags for cold storage. Second Sons delivers the processed hops to the brewer.

Later, the team removes twigs, leaves and other leftover debris from the yard. The rhizomes, or roots, stay in the ground and go dormant. The team keeps the soil clean (free of weeds) and consistently moist until sprouts show up in the spring. While the plants grow, Bryan sprays protective treatments to avoid fungus and insect issues. A hop sample gets sent to a lab in Wisconsin to measure the alpha acids – something that’s important to show the brewers and solidify a harvest date.