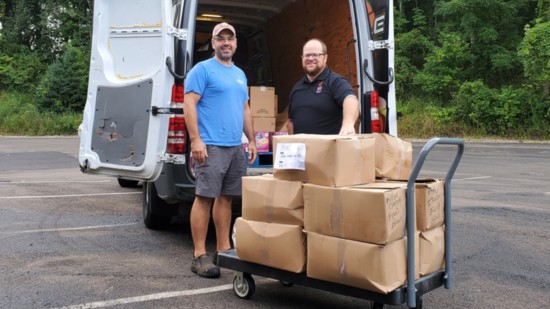 The Summit Church, located in Green at the time, was approached by a man with an unbelievable offer. It was 2014 and a Southern Baptist church located on Pittsburg avenue in North Canton would be closing. This man offered Summit Church that building free-and-clear. After accepting this tremendous blessing, the church had a mission to pay it forward.

“When we first walked through the door of the new building, our number one question was, ‘How can we serve this community?’ said, Jeff Dayton, pastor of The Summit church.

They started by providing free breakfast to teachers in the school district and building relationships with people within the community. Eventually, they got a big opportunity after providing Thanksgiving meals and Christmas gifts to children in the school district. The Care Team (Sue Orzak and Judy Demarco), requested a meeting with Jeff to discuss a possible partnership. The Care Team wanted to do a large-scale pantry and Jeff was on board. The only detail to nail down was where would all the food and products be stored?

Then a somewhat unusual partnership between the North Canton City School District, The Summit Church and Shale Brewing Company was created. Jeff Joliat, owner of Shale Brewing Company, offered plenty of storage in close proximity to the church. He also had a strong desire to give back to the community that supports his business, therefore an agreement was made. North Canton Cares Pantry officially served its first family in April of 2019.

The mission of North Canton Cares Pantry is to help North Canton families who are struggling. The goal is to provide seven to ten days of food and items to help a family to survive.

The operation started modestly, only serving approximately 16 guests per week. Steadily, the flow of new people increased. In less than one year over 1,200 families had been served. Despite an occasional minor hiccup here and there, operations ran smoothly. However, the great pandemic of 2020 was about to test the pantry in a way that was previously unimaginable.

Before the COVID-19 outbreak, the pantry would open on the second and fourth Mondays of every month. When the first stage of the statewide shutdown began on March 16th, it was decided that they would begin to serve the community weekly.

Demand quickly grew, and the pantry was serving an average of 100 families every week. Jeff and his team of volunteers have served over 1500 families in the past five months.

While they kept up with demand, certain things had to change. For example, instead of putting food out on shelves, they had to switch to pre-packed boxes of food. “We’ve been incredibly careful to pack what families really want and need. It is not just stewed beans. We offer a variety of food like mac-n-cheese, lunch meat and things that would feed a family with children,” Jeff stated.

Guests are given food and supplies based on their family size. They receive meat, produce, canned and boxed goods. Also included are other family essentials such as diapers, baby food and formula. Hygiene products are available for men and women, as well as laundry detergent and school supplies.

North Canton Care Pantry is back to offering services every second and fourth Monday from 6:00-7:30 p.m. The program’s popularity has grown so significantly that they have enlisted help from the State Highway Patrol. Jeff recalls, “We’ve had lines around the church and down Pittsburg avenue that continued all the way down to Portage Road.”

Only two criteria are required to qualify for the pantry’s services which are place of residence and military status. A person must live in 44709, 44718, 44720, 44721, 44685 or 44630. Veterans, current military and military DD214 qualify regardless of residence. Guests should provide a photo ID and a piece of mail showing current residency when they arrive.

As with any charitable organization, donations and volunteers keep the operation going. The cost of food, especially when needs increased from serving 40-60 families per week to 100-150 is substantial.

The easiest way to support the cause is to visit the website where you can click on the “give” tab. Donations are greatly appreciated, but volunteers are an absolute necessity for the success of the pantry.

With the holidays approaching, awareness for this type of charity increases. Jeff, pastor of The Summit Church, wants to drive home a strong point to members of our community: “Hunger doesn’t have a season.” Those in need are in need all year round.