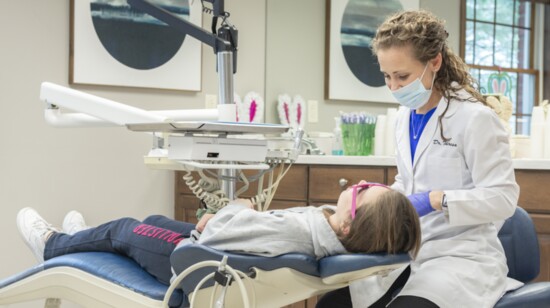 Dr. Theresa at Mellion Orthodontics cherishes working with her family and serving generations of patients in the community

From the early age of six, Theresa Mellion-Minter, D.M.D., M.S.D. helped file charts at her father and two uncles’ orthodontic practice that they founded 41 years ago. At Mellion Orthodontics, Theresa learned how to bend wire for appliances and was a clinical assistant throughout college.

“There was never any pressure to pursue orthodontics as a career, but my brother and I were both exposed to it as kids and learned to love it,” says Dr. Theresa. They even followed in their father’s footsteps by attending St. Louis University for Orthodontics.

Since 2015, Dr. Theresa has worked alongside her dad, Dr. Nick, and brother, Dr. Nate, at Mellion’s three Stark county locations -- which she says is the most enjoyable part of her job.

“Dad has been a terrific mentor for both of us, but he also steps back and lets us do our thing,” says Dr. Theresa.

According to the American Association of Orthodontists, males represent about 72% of orthodontists; however, there are a growing number of females entering the field. Currently, half of orthodontists under the age of 35 are women.

“It’s a wonderful career for everyone and definitely a woman,” says Dr. Theresa. “You can basically set your own hours and still be a mom. If I did it all over again, I wouldn’t change a thing.”

Mellion Orthodontics spans the generations in its patient population as well, serving customers ages seven to 75. Some of Dr. Nick’s patients from decades ago are now bringing their children in for treatment. They also have a few staff members who have been with the practice since Theresa was born. Mellion Orthodontics is a family affair in so many ways - Theresa even married a dentist (Nathan Minter).

All three docs are committed to community involvement and serve on the craniofacial team at Akron Children’s Hospital. “It’s a very rewarding experience,” says Dr. Theresa. “Watching these kids gain significant confidence and finally have the ability to smile is incredible.”

Learn more about Dr. Theresa and the entire practice at MellionOrthodontics.com.