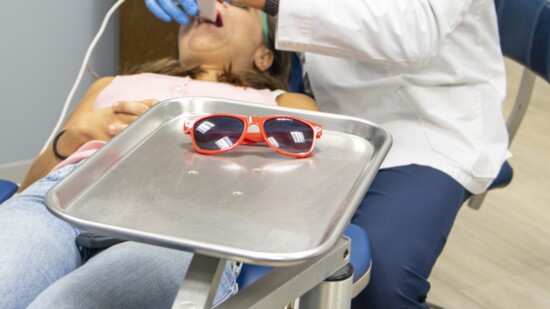 For best results with dental braces, it's important to lay the foundation early

Dr. Nathan Mellion of Mellion Orthodontics in Jackson Township is definitely in the family business. His father, sister, two uncles and three cousins also practice throughout Northeast Ohio. “My father and his two brothers opened their first practice in 1980, and I grew up watching them work,” he says. “I started working in the office when I was a teenager, and I saw the transformation that can be achieved in a person’s life. This profession is a way to literally put a smile on someone’s face.” Here, Dr. Mellion shares his thoughts on preparing children for braces.

When is the time for braces?

Traditionally, when we think of braces, we think of a younger teenager who has already lost most of their baby teeth. However, the first time you want a child to see an orthodontist is when they’re much younger. Seven is a good age to get started. Obviously, we’re not going to put braces on a child that age. Yet, by starting the process when they are that young, we can keep a much closer watch on potential issues outside the scope of general dentistry, such as jaw and tooth development as well as overall mouth development. As orthodontists, we’re trained to understand facial growth and tooth eruption patterns. The earlier we start monitoring and tracking these patterns, the better it allows us to plan for what’s coming. By being proactive early on, we can prevent significant issues from developing later.

What types of issues can you prevent?

Something we see a lot is a crossbite, in which the upper jaw is narrower and the upper teeth fit inside the lower teeth. When that condition is present, you really should work on changing it when the child is around seven or eight years old. Using a palate expander, we can correct this relatively easily in younger kids in approximately six to eight months. Another common issue we see a lot is teeth crowding, where teeth don’t have room to come in. We need to make sure it doesn’t effect new teeth coming in or baby teeth coming out. Asymmetrical jaw growth is another condition we see frequently. Visually, it presents as the chin being off-center. An asymmetrical jaw can cause increased tooth wear, which can lead to gum and bone loss. This can result in significant issues later in life, but we can help prevent that if we begin treatment at young age.

It all ties into your main question, which is when is it time for braces? The correct answer is that it’s time for braces when several different factors coalesce. When we begin braces at precisely the proper time, the child will have a better outcome. Likewise, when a child is in our care from the time they’re seven or eight, we’re ready at that precise time.  Overall, our long-range planning starts with setting that proper foundation at that early age.

This is not to say that if parents wait until the child is 12 or 13 all is lost. There are things we can do to help virtually every child. With that said, the earlier we start with them, the more control we have over the outcome.

Do young people have a rough time adjusting to braces? Is it something they dread?

Fortunately, braces have been common long enough that for most kids today, much of the fear is gone. Their parents probably had braces when they were young and they usually have friends who have already started the process. As a result, most kids today know what to expect. Our office does have a specific transition process we use to get patients used to the idea, and we have a lot of resources available to them—and their parents—to make the adjustment easier. However, I wouldn’t say it’s something most of them dread.

What are the options for braces these days?

Our office works with three main types: traditional metal braces, ceramic braces—which are also called clear braces—and Invisalign® clear aligners.  Metal braces are what everyone thinks of when they hear the word “braces.” Clear braces are similar but have more transparent components, so they are not as visually prominent. Invisalign is a series of removable trays for the upper and lower teeth which are virtually invisible. All are excellent choices that work well.

It’s not just kids who can get braces, right?

That’s right. Adult patients are always part of our practice. That’s why I say it’s never too late to make a difference. There are different challenges with adults because their teeth and jaw are finished developing, which can make the mechanics more complicated. They’re also more likely to have more tooth wear, gum loss and maybe even some bone loss. Although it can be more challenging, in some ways, it’s also more rewarding. It’s amazing to see the results.

Mellion Orthodontics of Jackson Township is located at 3235 Wales Avenue NW, Massillon, Ohio, 44646. The practice can be reached at 330.833.3335. Its web address is MellionOrthodontics.com.