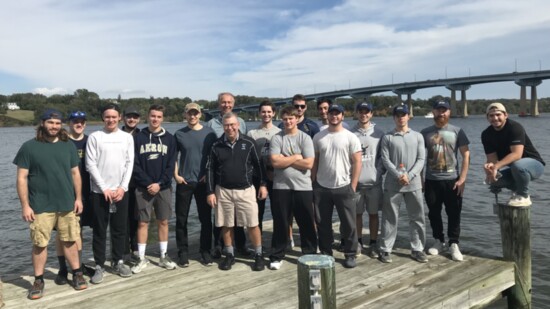 USA Hockey preaches that you don’t ever want to be a player’s last coach. The obvious philosophy focuses on developing players as an athlete. But Matt Koch knows his players will gain far more from developing personally and professionally. As head coach of the University of Akron Men’s Club Ice Hockey Team, Matt recognizes that he is the last coach they’ll play for. And he is seizing the opportunity to give his players a leg up on the competition, called real life.

“After me it’s pretty much all ‘beer league’ for the rest of their lives,” jokes Matt (a.k.a. “Coach Cookie”). “They know how to play hockey, but now they have to know how to become adults, too.”

Feeling a sense of responsibility, Matt created Life U, a unique program to help the players transition to adulthood. Matt and his coaching team launched the program during the 2017-2018 season after a year where 17 of the 20 recruits left. He knew his program had to be about more than just hockey.

“We don’t want a revolving door, so we shifted the focus on academics and personal development,” says Matt. “Since that point, we’re not necessarily attracting elite talent, but we are attracting players who will be great citizens. I would rather lose with good kids, than win with talented players who are jerks.”

Matt carves out about 50 minutes of time for Life U sessions before each Monday night practice at Center Ice Sports Complex in North Canton – the team’s home rink. In the program’s infancy, most presentations centered on 401Ks and other financial topics taught by Matt, who works full-time as a family wealth advisor for a leading financial services company. After he realized that his book of clients included a ton of business owners, he began inviting them to speak and it snowballed from there.

As Akron is predominantly an engineering school, Matt first turned to a key contact at a local engineering powerhouse: TimkenSteel.

“Tim Timken and I played hockey together years ago, so every few years, we’d arrange for players to tour the steel plant,” says Matt. “If you’re an engineering student, that’s like going to Disney World.”

Other Life U presenters – who are often former hockey players themselves – come from a wide variety of professions. Like the hockey dad and software developer who spoke about how to excel as a first-year employee (a refreshing take on the saturated “here’s how to get a job” speech). Or the UofA engineering advisor who taught players how to properly write a thank you note, and how it helps them stand out in a crowd. He would know – he saved all 17 handwritten thank-you letters he has received after three decades of advising 300+ kids per year.

Topics change from year to year because players are on the roster for 4 or 5 years at a time. Matt also incorporates topics based on current events in the news or on the calendar.

“A couple years ago when the Pittsburgh synagogue shooting occurred, I presented a session on the roots of anti-Semitism,” says Matt. “We typically have a Monday night Life U lesson that falls on Martin Luther King Jr. Day, so we’ll read one of his speeches or watch a video with him.”

Matt also invited a police officer to come explain what the players should do when they are involved in a traffic stop: stay calm, turn on the dome light, keep hands on the steering wheel, put hazard lights on, speak politely, etc. It is the kind of insight that the young men could put into action that same day. Other sessions might not pay off as immediately, but they all make a difference in some way.

“I look at all sports or extracurriculars as delivery vehicles… I’m watching these kids grow, graduate, get employed, then marry and start families,” Matt says with pride. “The players are absolute sponges at this age and we really can make a difference in their lives.”

But how does he know the program is working? Matt says the players understand that they will not be paid to play hockey, and that it is more important for them to know how to handwrite a thank you note than it is to catch a breakout pass.

They even take it upon themselves to sign a puck as a gift for each Life U speaker, and the more they show this kind of responsibility, the more Matt gives them. They have to learn to schedule the games, find referees, arrange travel and hotel accommodations and get out of class when necessary for away matches.

Matt also gives them opportunities to learn from mistakes both on and off the ice. The team implemented what it calls “Mistake Protocol” to acknowledge, apologize for and move past personal mistakes – from missing practice to making a bad play that cost them the game.

“These are 18 to 22-year-olds. They’re gonna screw up – they’re supposed to,” says Matt. “I believe college is about learning how to deal with mistakes.”

All in all, this combination of lacing up for the rink and for the real world has led to an impactful family environment.

“Coaching this team has been like creating a family and in some ways I pick up 8 new nephews a year. The players literally call my wife ‘Aunt DeAnna,’” boasts Matt. “A few years ago, the team captain asked my daughter to be the flower girl in his wedding. It tells me we’re making an impact.”

His own son plays club hockey at the U.S. Air Force Academy, and Matt is working to schedule a game in October where he will coach Akron against the son’s team. It is a day they are both looking forward to.

Matt is also hopeful that other teams will create their own Life U programs. “I’ve spoken about Life U on a number of podcasts about how we’d be happy to share our syllabus with other coaches,” promises Matt. “We’re a unicorn right now and that’s a problem. I’d give up the competitive advantage if we could expand this program.”

Matt Koch launched the Life U program in the 2017-2018 season featuring business owners/former hockey players who present a key topic for 50 minutes ahead of each Monday-night practice (almost five months).

SIDEBAR - PAGE 3
Key Topic 1
Thank You Notes
After 30 years of working with thousands of students, the U of A Engineering College tutor said he’d only received 18 thank you notes. He taught us the value of a handwritten note and how it helps you stand out for the right reasons.

Key Topic 2
The Habit of Saving
Our players use the Acorns app to develop a positive habit of saving money. Up until age 30, what you save is more important than how it’s invested. Creating the habit ensures that you don’t wake up at 45 and realize you have nothing for retirement.

Key Topic 3
How to Shine as a First-Year Employee
Everyone talks about how to interview and get your first job. We invited hockey dad and Diebold-Nixdorf employee Jamie Meek to give a presentation on being a rock star first-year employee. It was a unique angle that resonated with the players.

PULL QUOTES - PAGE 4
OPTION 1:
“We knew it had to be about more than just hockey, so we shifted our focus to academics and personal development. I would rather lose with good kids, than win with talented players who are jerks.”

OPTION 2:
“I look at all sports as delivery vehicles because we get to watch these kids grow, graduate, get employed and start families. It’s a really nice age where you can make a very large impact.”

OPTION 3:
“The players understand that they will not be paid to play hockey, and that it’s more important for them to know how to handwrite a thank you note than it is to catch a breakout pass.”

Matt Koch (aka “Coach Cookie”) started working at hockey schools at age 15. His first boss, Mitch Korn, taught Matt more about business than hockey.
When knee surgery and a broken jaw sidelined Matt in high school, his University School Head Coach, Brian Teeple, gave him an outlet of working with JV.
He coached local youth teams while away at college in Oxford, Ohio.
Matt estimates he’s coached 80 or so players over the decade spent with Akron.
His day job as a family wealth advisor is like coaching, just on a different scale.