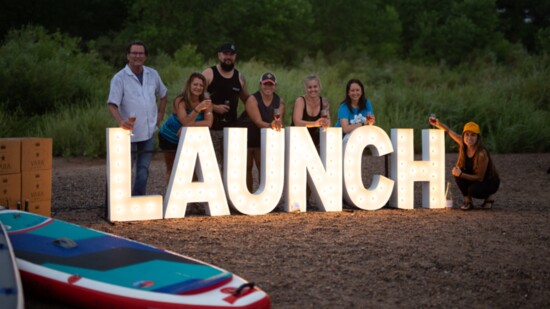 How a Launch Unfolds

Every photo has a story behind it…spoken and unspoken details that mold and influence a final product. It is a single image capturing an evolution of events. Sometimes, the image rendered is just as it was imagined, and sometimes something more beautiful burgeons.

We had an elaborate idea for our first cover. We wanted a drone photo of our team and partners “launching” on paddleboards together from a beautiful pebble beach with the Sandia Mountains and Rio Grande River as the quintessential backdrop. The 24 hours prior, we scoped the site and conjured our plan for the photoshoot. We obsessed on our weather apps through the next day, and in true New Mexico fashion, the weather unexpectedly and dramatically changed as our shoot time neared with several cells dumping rain all around.

We gathered anyway. We waited and watched the sky together, laughing about how flawless the weather was the previous day. Doubt was becoming overwhelming, but we waited.

The storms circled and threatened, but also hinted they may drift past us. The rain became a little lighter, a slight warmth filled the air, and everyone involved had arrived. We knew this was our moment, our window, and our glimmer of hope for that “perfect” cover shot. Under a slight drizzle, we moved as quickly as possible.

Alas, we neither set afloat paddleboards nor were we able to fly the drone for the shot. Instead, we gleefully toasted bubbly from Vara Winery, we all collaborated on some 'Insta-perfect' photos,,and we shared conversations and many, many laughs. It was the perfectly-imperfect moment for creating new friendships, future encounters, and as it turns out, the perfect photo.

Our cover is actually a story of several adventurous people willing to head into a storm for the chance to commemorate a new idea and movement together, and the launch of a new magazine.

Saying “no” is believed to be powerful. WE think saying “yes” holds magic. Besides the effort and vulnerability that comes with being an adventurous yes-person, you open yourself to unimaginable moments of opportunity. Being “all in” moves mountains…and sometimes paddleboards, letters, and champagne.

We cannot be more thankful for those who said YES to our crazy idea and stuck it out when nature decided to lend a hand for our photoshoot. You are why our community is great and why it thrives.

Albuquerque Lifestyle is more than a magazine, it is a platform for our community. We want to invite you into our stories and on our adventures. Become our friends, our partners, and help us in our mission to elevate our community and lifestyle.