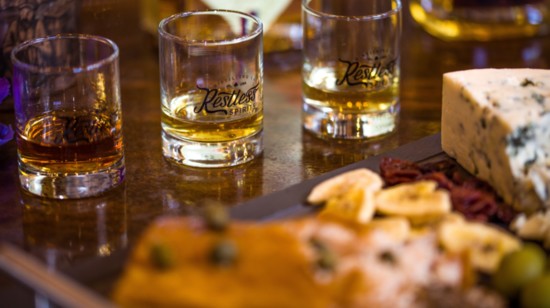 Whiskey in a Teacup

Whiskey Isn't Just for the Gents Anymore. Throw Your Own Tasting Party!

There's a modern misconception that there's such a thing as 'girly' drinks and 'manly' drinks. The world of spirits is inhabited and enjoyed by both genders. Of course, those making spirits are still predominately men, which the exception of Benay Shannon, the head distiller at Restless Spirits in North Kansas City. Shannon is the only female distiller in Missouri, and she showed me the ropes on how to taste and share the goodness of what the Scots call the 'water of life.'

Distilling and brewing have a lot in common. Both start with a base of grains. In the U.S., whiskey is defined as any spirit that starts with grain and is aged in contact with wood. At Restless Spirits, Shannon oversees the production of three whiskeys--the Sons of Erin, which is an imported Irish Whiskey, Gullytown, which is distilled from scratch on premise at Restless Spirits, and Stonebreaker, which is a blend of the two.

Gullytown is Kansas City's first single-malt whiskey, meaning it is produced by one distillery out of one grain bill. Shannon starts with a grain bill of 100 malted barley and double distills on a pot still. She then ages in two different barrels--one new charred oak and one bourbon cask. The barrels in which whiskey is aged directly affects the color of the spirit. The resulting whiskey is deep in color and rich and full-bodied with hints of dark cherry and a smooth vanilla finish.

Traditionally, whiskey should be tasted in a tulip shaped glass to help point aromas at your nose, but any receptacle will do in a pinch. Often, adding a tiny bit of water or an ice cube will help to bring out more latent flavors in the whiskey as well. The water will lower the proof of the whiskey and lets the flavors shine through. Don't be afraid to add a pitcher of room temperature water to the table.

There is a difference between drinking and tasting. When drinking, there's nothing more to be done than enjoy. When tasting, you should pay attention to the color of the liquid, aromas before you drink, and then finally, the flavors as they roll over your tongue. The finish will be the lingering flavors left after you swallow.

For pairing, look for foods that mimic the flavors in the whiskey. For a full-bodied single malt, go for bold flavors like smoked salmon or strong, funky cheeses. Gorgonzola, bleu or funkier soft cheeses can stand up against the robust flavor of a barreled spirit. To bring out the sweetness, include dried fruits such as dried cherries or bananas.  Briny, herbal flavors like pickled olives can also accent lighter, more floral whiskeys.

On the flip side, you can also pair stronger flavors in food with the more delicate whiskeys to allow them to balance each other out rather than compete.

If you don't have a bottle of Gullytown, Stonebreaker or Sons of Erin on hand, look for these styles:

Most recognizably associated with Scotch Whisky, there's a lot of diversity in this style. Single malts tend to be categorized for the length of time that they spend in the barrel.  For Irish whiskey, try Red Breast.  For an accessible beginner Scotch, try a Highland Scotch like Glenfiddich or Macallan.

Although whiskey snobs will say that there's nothing else besides single malts, there are some great blended whiskeys out there as well. Try a bottle of Four Roses Bourbon. Plus, you'll have some on hand for that Derby Day mint julep!

Without the restrictions of a 100% malt grain bill, these whiskeys can have more delicate flavors. Many Japanese producers are excelling in this style. Try the Suntory Chita Whiskey.

Combine whiskey, simple syrup and bitters over ice in a shaker.

Shake until cold and strain in an old fashioned glass.

Top with a cherry and garnish with a swatch of orange peel.

To make Earl Grey syrup, combine equal parts sugar and water and bring to a boil until all sugar is dissolved. Soak three Earl Grey tea bags or the equivalent amount of tea in a teaball for 20-30 minutes. Remove tea and cool. Store in an airtight container in the refrigerator for up to two weeks.