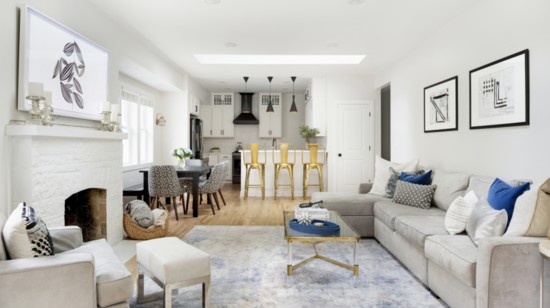 A 1920's Minneapolis Home is Transformed

Sometimes the best things happen when you are not looking.  This happened to be the case for a young couple living in the Twin Cities.  Joanie and Ryan were not actively looking for a new home, but their realtors, Susan and Gary Wahman of Edina Realty always had them in mind when new properties became available fitting their criteria of neighborhood, size, and price range.  Then appeared this quaint South Minneapolis home located in the Fulton neighborhood; the exact neighborhood they had their eyes on. Ironically, this also happened to be across the street from Joanie’s parent’s first house.  It took just one showing and they were smitten with this charming, 1921 built gem on Abbott Avenue.

“We just knew right when we walked in it was for us,” said Joanie. “There was such a good energy, the house was loved and filled with happy memories. The previous owners had lived there for over 60 years and it was well taken care of.”

Even though the house was perfect for the couple, there was still some work that needed to be done to bring the vision of their dream home to life. When purchased, the house was 1,231 square feet with three bedrooms, two baths, a half story on the second level, and an unfinished basement.  The plan was to open up the space and change the layout of the house, bringing a more fluid flow throughout.  This would also allow for any updates or repairs needing to be completed.

The first phase was adding two extensions to the house. The first extension was off the right side, keeping the original fireplace intact.  The wall to the kitchen space was lengthened and a dining room was added.  A wall was also taken down to create a more open kitchen with quartz countertops throughout and a large kitchen peninsula for extra seating and entertaining.  The second extension was off the back of the house, creating a new exterior back entrance and an addition which included laundry, a mudroom, and space for a large coat closet and pantry. This also allowed for a more private entrance to the master bedroom.  With the renovation, the house was able to incorporate better function and flow growing to 2,300 total square feet.

The couple wanted to keep the hard wood floors, but they were deemed unrepairable, so the floors were replaced throughout the entire house. Both bathrooms were redone to include modern updates. The master bedroom was reconfigured to accommodate a walk-in closet and larger bathroom space with a soaking tub.  Another major renovation was replacing all the windows and putting up new drywall.  Original skylights were kept to enhance the natural brightness, but became prominent when the popcorn ceilings were converted to flat ones.

Extensive work went into the backyard, and the layout was revamped to include a large patio area.  Fencing was also added along with a total overhaul of the siding making for a completely renovated look for the entire property.

Joanie worked with designer, Leigh Hull, to enhance the interior of the house by focusing on the 1920’s esthetic and bringing in modern elements.  Hex tile, penny rounds and basket weave designs were used. Beveled edge subway titles were chosen for the kitchen with black stainless-steel appliances. After the extensions were added and the wall in the kitchen was taken down, the lighting was beautiful and brought a natural open feel to the space. Fun light fixtures were placed throughout the house to add character. “The entire house has a nice energy and feel to entertain and also for just relaxing with a quiet dinner,” said Joanie.

“We were so fortunate to work with such an amazing team which included Josh Hauer as the contractor and Ken Huber as the architect.  They worked around the clock so we could get moved in as soon as possible. We couldn’t thank our realtors, Gary and Susan Wahman from Edina Realty enough. They found us our dream home. We can’t believe we live here.”