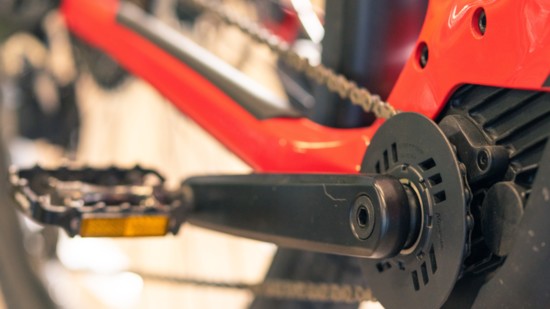 It’s a topic Don knows a lot about.

He commutes to from his home in Lakewood to work in Parker on his Trek Super Commuter Class 3 electric bicycle, a good 60-mile round trip.

Don says he typically rides three to four days a week when the weather is decent.

“I can do the exact same commute time on this,” says Don, pointing to his Trek electric, “that I can on that [his truck], and I’m exercising. And I’m in a better mood.”

Don and Tyler say electric bicycles are fun to ride and good for the environment, eliminating pollution and congestion by the typical auto commute.

“Every bit that you can do to keep a car off the road, I think, is a really big deal,” Don says.

Electric bicycles are an equalizer for both cyclists and everyone else because of their pedal-assist function. They also help elderly cyclists or those with knee or hip issues continue to ride feeling safe they will make it through a ride.

“One person doesn’t feel like they’re holding the other up, and they get a good workout,” Tyler says.

2. Pedaling on an electric bike will turn on its motor, called the pedal assist. The motor stops when you stop pedaling.

3. Electric bikes have three classifications: Class 1 and 2 go up to 18 mph. Class 1 has a pedal assist, and class 2 uses a throttle. Class 3 electric bikes go can up to 28 mph and are only meant for roads.

4. Just like a cell phone, an electric bike plugs directly into an outlet. The battery can also be taken off and plugged in.