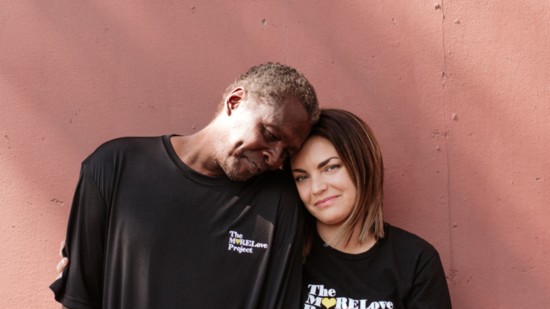 If Not Me, then Who?

The MORELove Project Shows Us that if You Want It, You Can Have It

“Be someone’s constant” is Kristine Moreland’s encouragement to the world. The founder of the MORELove Project, she does not just ask it of others but does it every Tuesday night on the streets of Seattle.

By day, Kristine, an Eastside resident, runs a successful mortgage company, and by night “spreads love,” as she calls it, on the streets of Seattle. “Moreland by day and more love by night” is her life tagline, she shares, chuckling with a twinkle in her eye, which says it’s all going to be OK no matter what she faces in the office that day or on the streets that night.

The MORELove Project isn’t about Kristine and her intense tenacity and unique perspective on life where she exemplifies, “If you want it, you can have it.”

Her request of the community is to love them, not judge them. This perspective has transformed countless lives—lives like Johnny Jones who Kristine found sleeping under a box just a few streets from CenturyLink Field. He was easing his pain by getting high every day and was unsure of how to deal with his life. He saw no reason to live. He was a man just like your father, brother or friend who had not been given a community or tools to help him handle a challenging life.

He grew up in Chicago, and at a young age, this African-American boy was the target of disheartening racism. One of the most shocking instances happened at a young 9 years old. An older white man gave him an apple with razor blades secretly inserted inside. As he took a bite, the blades cut apart his entire mouth. The only thing the doctors did to fix it was pull the razor blades out, leaving significant scars—a painful reminder of this act, to this day. These and many other experiences over his teenage years made him lash out. Consequently, he spent 28 years in prison, and when he was released, all his family had passed away. This is where Kristine found him, and from her connection with him, he is now off the streets and off drugs. He now believes there is a good life to live and has found family through the MORELove Project. Johnny's story, along with other similar stories, is the motivation behind the project.

Kristine has been working on the street consistently for more than 12 years, and since she launched the MORELove Project three years ago, it has been steadily growing. She never envisioned starting an organization like this.

“I was one of those people who looked at the homeless and thought they were gross, disgusting and need to get a job,” she says.

Then, 12 years ago, she felt something weighing on her to do something, so she started a coat drive. After collecting many coats, she wanted to see where they were going and who was getting them, so she went to deliver them.

“That night changed my life. I saw humans, met children and heard stories of pure anguish from people like myself who were on the verge of homelessness. I then knew that this is what I was supposed to be doing.”

The MORELove Project, an all-volunteer organization whose mission is to connect the community to those in greatest need, was started because of experiences like Kristine had that night. What started as a coat drive is now changing the course of people’s lives. The project now provides bus passes, blessing bags, diapers, supplies, short-term housing, mobile car mechanical assistance, health care and more.

There is something everyone can do and a way everyone can take part. At least three times a week, you will find some of the more than 5,000 connected people doing something to spread MORELove. These people operate from a premise that anyone can help spread MORELove: a group of moms going to give hugs on the streets, business owners donating tangible items, children helping make sandwiches to feed the hungry or professionals visiting a homeless person on the streets during lunch.

“Whatever you do, just contact me, and we will find a way to spread MORELove together," Kristine says. “Open people’s hearts first to open their minds later to a better life.”

The MORELove Project’s request is that you would consider being open to doing something. Start by opening the door to allow your heart to “love without judgment” because even in the smallest way, you can make a life-changing difference. It could be going on the streets with the MORELove Project, donating tangible items, donating finances or simply smiling at the next person on the street with MORELove than the last time you saw them. Join the project in spreading more love by day or by night wherever you are.

“If not me, then who?” Kristine asks.