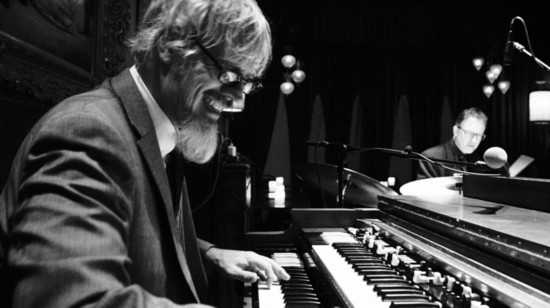 Ken Lovern is no stranger to the Kansas City music scene. He has played keyboard in basement rock bands as a teenager as well as full-time after college for Kansas City vocalist Ida McBeth. After time away from playing music full-time to attend law school and then work as a research attorney—a concert at the Bottleneck in 1997 shifted his focus.

“I was in my late 20’s when I went to a show at the Bottleneck in Lawrence, and Medeski, Martin and Wood were playing there,” Lovern recalls. “He was playing Hammond organ, and I was just like, ‘Wow, that sounds so great.’ Within a month or so I bought a Hammond organ and started practicing and playing gigs on it.”

He immersed himself in learning the intricacies of the instrument by listening to organ jazz recordings, featuring organists like Jimmy Smith or Jack McDuff, and tried to replicate the sounds. Occasionally, he’d catch local organist Everette DeVan’s performances, where he witnessed first hand how to achieve certain sounds he’d attempted to replicate.

“The organ is a very physical instrument because you’re using your feet to hit the bass pedals and playing with both your hands and manipulating the sound controls,” he says. “Being able to see somebody do it answered a lot of my questions.”

In 2003, five years after purchasing an organ, he started OJT with guitarist Brian Baggett and drummer Kevin Frazee. Earlier this year, Frazee stopped playing gigs due to health concerns, so drummer Todd Strait (who is featured on their first CD) started to perform with OJT again. Lovern composes music for the band, alongside Baggett, and crafts songs that center on the Hammond organ’s capabilities.

“That’s the nice thing about playing a lot and having steady gigs is you can try new material and see if it sticks,” he says. “Sometimes you only play it once or twice and it never comes back—other times you have other tunes that are worked into the repertoire.”

The group concludes each set with the OJT Theme, which Lovern describes as a break tune with a short theme and an improvised section of varying lengths. He mentions that it’s often a highlight of the show for returning audience members due to its unpredictability.

“I’ve noticed this as an audience member myself—if the band is really improvising it has a different feeling,” he describes. “It has a very ‘in the moment’ kind of consciousness. I notice that as an audience member, and I certainly notice it as a musician. When you’re improvising, and everybody is just trying to figure out what’s going to happen next, it puts you right in the moment.”

New Originals for the Green Lady features one entirely improvised track, “Back Yard Improv Jam.” This became one of Lovern’s favorites due to its almost effortless nature.

“If I did another studio recording, one project I’d be interested in doing is all improvised stuff like that because I think in the studio it’s particularly interesting,” he says. “If you’re in front of an audience doing that, it can be kind of risky because you don’t know what’s going to happen next. Sometimes you get lucky, and people go to the change together or changes work out. It all just kind of fell together which has its own kind of magic to me.”