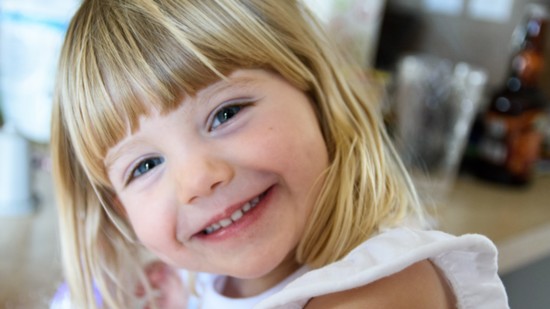 Éowyn Maynes was known as the 'tiny terrorist' by her parents, K.C. and Amanda Maynes. The youngest of their four daughters, Éowyn was sure that she had five parents and that three of them (her sisters) were pushovers. She was a fan of anything Disney, especially Mickey Mouse, and the more color, the better. She was full of life, energy, and spunk, and that is how she will be remembered. Éowyn lost her battle with cancer last year, and her parents, sisters, and the community of Smithville are dedicated to making sure her legacy lives on by helping others enduring the same hardships that she did.

As a kid, Éowyn was rambunctious—she ran, played, did gymnastics, and threw herself into everything with vigor. When she was walking down the stairs in their home to her room one night, she tripped and bumped her head. Thinking it was mere toddle clumsiness, they took her to urgent care. After a trip to Children's Mercy to rule out a concussion, they found something much more concerning—a tumor.

After a CT scan, Éowyn was diagnosed with diffuse intrinsic pontine glioma (DIPG). This particular type of cancer centers in the pons, the area of the brain that controls autonomous functions such as breathing, heartbeat, balance, eating, and drinking. Its effects are severe and fatal and it is found almost exclusively in children.

K.C. says that one of the many problems with DIPG is that it is not a solid tumor. Cancerous cells are mixed up with healthy tissue. While brain tumors are typically responsive to radiation, they react more poorly to chemotherapy. The Maynes family searched for alternative therapies with the blessing of their oncologist from Children's Mercy.

"We looked for trials in the U.S. for drugs that might help, but there wasn't a lot. We ended up going to Monterrey, Mexico, for a trial that a group of parents had had good results with," says K.C.

Even with this experimental study, Éowyn lived 342 days from diagnosis to passing. Eleven months is the average for this diagnosis, and the Maynes family, with the blessing and support of their doctors at Children's Mercy, made the most of it.

"We were told from day one; this is a death sentence. But we were also told, 'Let's see how far we can get. Let's try to make it to a year.' We worked with Dr. Kevin Ginn there, and he and his team were excellent. They worked with us; they were honest but compassionate, and willing to let us try new things. He was encouraging with the experimental treatments when they were working, and when they didn't, he encouraged us to switch it up," says K.C.

Once the tide turned, the family focused on relishing the time that they had with Éowyn. K.C. works for the federal government and between a variety of initiatives, was able to be at home with her for the long run. Amanda, a stay at home mom, was also devoted to her. For the time that she had, she had all the love that she could ask for.

The Éowyn: Fight Like a Princess organization was started to help defray the costs of treatments and living for a family whose life was put on hold. The organization received a groundswell of support, and after her passing, the family decided to continue the work to support other families that were going through the same thing.

One of their first yearly initiatives was a toy drive in cooperation with the Smithville public schools. Partnering with the school that Éowyn would have attended had she lived, they gathered toys for the kids undergoing treatment at Children's Mercy. This is the second year for the drive, and they gathered three carloads of toys for Children's Mercy Hospital.

There will never be a replacement for Éowyn—her spark can never be replicated. But her family is soothed by the efforts to help other children that are struggling in the same way and hopeful for a time when childhood cancer is funded and fought with the same intensity as other cancers. Her spirit lives on, fighting year after year.