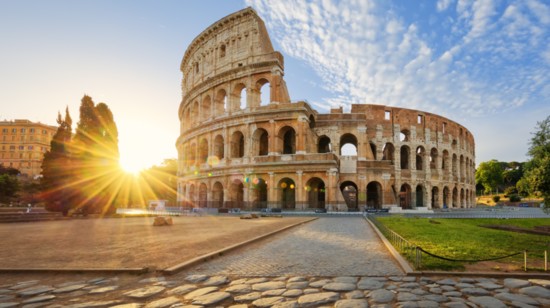 Photography by Amelia Pavlik and Provided

Bottles of bubbly. I was cutting into the deep tangerine yolks of my made-to-order eggs during my first breakfast at The First Roma Arte in Rome when I spied the self-serve bottles of prosecco. The first thing that came to my mind is, "WWAD?" — that is, “What Would Audrey Do?”

Of course, I helped myself to the bubbles. After all, I'd come to the Italian capital to follow in the footsteps of Audrey Hepburn's character, Princess Ann, in the movie Roman Holiday. My goal was to experience all the city had to offer, princess-style.

Over four days, I followed an itinerary that included sights from the iconic Hepburn film, as well as a few experiences I thought Audrey's character might have indulged in today.

Eat, sleep and art. Rome is known for being home of great works of artists like Caravaggio and Michelangelo. The hotel I’d selected prides itself on the 150 contemporary artworks that decorate the property. Every suite  is staged by an artist and becomes your own private gallery. After being greeted at check-in with a complimentary glass of bubbly, I was escorted to my suite, which featured lush carpets, a cloud-like bed covered in smooth white sheets, a plush blue velvet sofa, shelves lined with books, and art works of swirled pops of colors. It was Roman chic and cozy all at once. In addition to the exquisite breakfast offered each morning, the hotel is home to the Michelin-star restaurant, Acquolina. Dinner there my first evening took me on a seafood journey that started with an exquisite preparation of octopus  followed by a delicate dish of fresh pasta with sea urchin. Swoon.

Bring the movie to life. Since Roman Holiday was filmed in Rome, it’s easy to retrace the steps that Audrey and Gregory Peck’s character, Joe, took during their time together. The hotel put me within easy walking distance of so many of the sights in the movie: Trevi Fountain, the Spanish Steps, the Colosseum, etc. Plus, a few blocks away from the First Roma Arte is the spot where Joe’s apartment was located: 51 Via Margutta. And then there’s Via della Stamperia 85,  the location where the princess receives her famous short haircut in the film.

Get a guide. In the movie, the princess relies on Joe to show her the sights of the city. I had Joanna, a guide from City Wonders. Since tour guides are plentiful in Roma, it’s often hard to tell which companies are reputable. So, I’d recommend booking a tour with a company like City Wonders in advance. (This is a must if you want to visit the Colosseum. Otherwise, you’ll be stuck in line for hours just waiting to get in.) I opted for the Best of Rome walking tour, as it covered several of the spots I mentioned earlier that are featured in the movie.

Say "ah" at the Hotel Eden spa. If you’re in need of a little R&R amid all of the sightseeing, book an appointment at the Eden Spa at Hotel Eden, which offers a selection of treatments ranging from massage to manicures. When I arrived for my custom facial, I was escorted into a spacious spa suite. The treatment itself was exactly what my dehydrated skin needed after the long flight (and the wine and cappuccinos I’d enjoyed over the last few days). And FYI, don’t miss the Eden’s rooftop restaurant, Il Giardino.