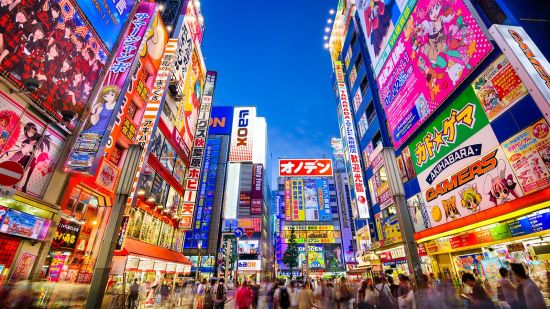 TAKE A TOUR OF JAPAN THROUGH YOUR TELEVISION

Do you ever get so invested in a show that you feel like you personally know the characters? (Looking at you, Friends, How I Met Your Mother, Parks and Recreation, and Schitt's Creek fans!)

You can use that feeling to your advantage and watch TV that makes you feel like you have experienced a different place too! Try taking a television trip to Japan by checking out these Japanese shows and films.

If you don't think you'd like anime because you don't like cartoons, give some of these older, more mature titles a chance. You'd be surprised how emotional and deep some animated stories can be.

This is definitely not one of those anime that would be considered emotional and deep. However, it is a very fun psychological thriller set in Japan. Not only will you learn about Japanese culture and what regular life looks like for a family of a police chief in Japan, but you will also learn a bit about ancient Japanese gods and religious beliefs. This story particularly dives into the idea of shinigami, gods of death.

In this plot, a shinigami uses a notebook to kill people on Earth. They write down the name of someone and how they will die, and then it happens. When a shinigami drops his death note on Earth to see what will happen, a high school student finds it and begins using it to kill convicted criminals. Believing he is doing the right thing by taking justice into his own hands, this kid goes on a wild adventure trying to hide his identity from the Japanese police—and his father who is in charge of the case!

If you like crime shows and films about serial killers, you will be fascinated by this unique story and how it is told.

Note: This series is pretty long, so in order to get to the satisfaction of what finally happens in the very end, you will have to stay patient through 37 episodes. Each episode is only 23 minutes long, so it goes fast. But it is more of a commitment than sitting down to watch a movie! It's still worth checking out if you're interested.

This historical piece has a much different tone than Death Note and is on the deeper, emotional side of anime. While it's not actually set in Japan (the setting is a fictional country in Europe), it is still Japanese made. The drawings are beautiful, and you will feel a lot!

"The Great War finally came to an end after four long years of conflict; fractured in two, the continent of Telesis slowly began to flourish once again. Caught up in the bloodshed was Violet Evergarden, a young girl raised for the sole purpose of decimating enemy lines. Hospitalized and maimed in a bloody skirmish during the War's final leg, she was left with only words from the person she held dearest, but with no understanding of their meaning.

Recovering from her wounds, Violet starts a new life working at CH Postal Services after a falling out with her new intended guardian family. There, she witnesses by pure chance the work of an "Auto Memory Doll," amanuenses that transcribe people's thoughts and feelings into words on paper. Moved by the notion, Violet begins work as an Auto Memory Doll, a trade that will take her on an adventure, one that will reshape the lives of her clients and hopefully lead to self-discovery."

Departures is not an anime film, but instead a beautiful Academy Award winner.

"Daigo Kobayashi is a devoted cellist in an orchestra that has just been dissolved and now finds himself without a job. Daigo decides to move back to his old hometown with his wife to look for work and start over. He answers a classified ad entitled "Departures" thinking it is an advertisement for a travel agency only to discover that the job is actually for a "Nokanshi" or "encoffineer," a funeral professional who prepares deceased bodies for burial and entry into the next life. While his wife and others despise the job, Daigo takes a certain pride in his work and begins to perfect the art of "Nokanshi," acting as a gentle gatekeeper between life and death, between the departed and the family of the departed. The film follows his profound and sometimes comical journey with death as he uncovers the wonder, joy and meaning of life and living."

"Three sisters live together in their late grandmother's house in the city of Kamakura. They have lived together since their dad left home for another woman and their mum imitated her husband by running off with another man. Sachi, 29, the oldest Koda sister, a nurse at the local hospital, acts as a substitute mother to Yoshino, 22, and Chika, 19. One day, the threesome learns of the death of their "traitor" father and it is only halfheartedly that they go to his funeral. But in Yamagata something unexpected happens: they meet their half-sister Suzu, 13, there and immediately fall for the spell of this exquisite young creature. Sensing that Yoko, her father's widow, will not be a fit guardian, Sachi invites Suzu to move in with them."

"Still Walking is a family drama about grown children visiting their elderly parents, which unfolds over one summer day. The aging parents have lived in the family home for decades. Their son and daughter return for a rare family reunion, bringing their own families with them. They have gathered to commemorate the tragic death of the eldest son, who drowned in an accident fifteen years ago. Although the roomy house is as comforting and unchanging as the mother's homemade feast, everyone in the family has subtly changed."

Your Lie in April

While this anime show feels a bit younger because of all of the characters being set in middle school and having adolescent drama, there is also a much deeper core. It will surprise you how connected you can feel to these animated kids and how much you will wish you could protect them and help them through everything they go through. You may even shed some tears in the end.

What begins as a typical anime about musical students turns into a beautiful story that tackles parental abuse, chronic illness, anxiety, depression, love, loss, and so much more. Plus, a lot of the main character's monologues sound like poetry, and the classical music played throughout is captivating.

"Kousei Arima was a genius pianist until his mother's sudden death took away his ability to play. Each day was dull for Kousei. But, then he meets a violinist named Kaori Miyazono who has an eccentric playing style. His monotonus life was about to change forever."