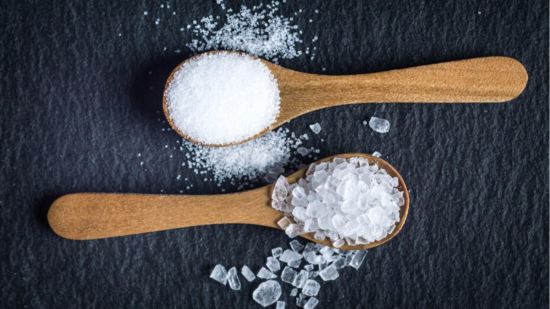 How to Monitor Your Salt Intake

Sodium overload is a major health issue in the United States. We are a salt-obsessed society with 9 out of 10 Americans consuming too much sodium. On average, a baby boomer consumes more than 3,000mg of sodium a day—more than twice the 1,500mg or less than 1 teaspoon recommended by the American Heart Association for adults over the age of 50.

An often-unrealized fact is that more than 75% of sodium consumption comes from processed foods and eating out, not the saltshaker. Ninety percent of baby boomers are consuming too much sodium—and that excess can have a lasting impact on our health. Research has shown excess levels of sodium lead to increased risk for high blood pressure; stroke; heart disease; osteoporosis; stomach cancer; kidney disease; kidney stones; and increased water retention, which often leads to puffiness, bloating and weight gain. Your body needs sodium to maintain critical fluid balances, transmit nerve impulses, and contract and relax your muscles; however, less than 500mg is required each day to perform these crucial functions.

Nearly 80 million strong, this generation may have grown up on meatloaf, mashed potatoes, tuna casserole, eating TV dinners and salting their already-salty food, but times have changed. They’re now mindful about the fuel that nourishes their minds and bodies and are actively seeking recipes, tips and tricks to cut down on sodium and salty foods. Many baby boomers are developing health concerns, and top of mind for many of them is their sodium intake. This generation is taking it back to the kitchen and looking at food a whole new way: food as medicine.

How Can I Monitor How Much Salt I'm Consuming?

Know the “Salty Six.” According to the American Heart Association, the “Salty Six” is a list of six popular foods that are likely adding the highest levels of sodium to your diet. 1. breads and rolls 2. pizza 3. sandwiches 4. cold cuts and cured meats 5. soup 6. burritos and tacos.

It is also important to take stock of the items in your pantry, refrigerator and freezer. If you are finding canned tomato sauce, canned soup, salad dressing, premade frozen dinners and/or soy sauce, they may just be the worst culprits in your battle against salt.

Reading the nutritional facts, serving size and learning the “label lingo” can also help you monitor sodium intake. Be aware that sodium content can drastically differ from one brand to another. Watch out for various forms of sodium, like sodium alginate, sodium ascorbate, sodium benzoate, sodium caseinate, sodium chloride or sodium citrate. Be vigilant and reduce or replace those items that register high in sodium. Click here to download a free quick guide on some easy SALTernatives.

Here are sodium-related terms you may see on food packages:

Most Americans became addicted to the taste of salt when they were children. While it takes time to retrain your taste buds, within three to four weeks, your taste buds will start to adjust and become more sensitive, allowing you to get the same amount of flavor from less salt. I promise, your heart will thank you.

Eating Out at Restaurants on a Low-Sodium Diet

Adults ages 55 to 64 are now the top spenders at restaurants, according to the National Restaurant Association’s Restaurant Industry Forecast. This age group buys an average of 193 meals out at restaurants per year. So how do you eat out at a restaurant and still monitor your salt intake?

These days, eating out is a fact of life for most Americans. When we are not preparing our own food, it usually means we are consuming an excessive amount of sodium, beyond what we should.

Americans' taste buds have become accustomed to saltier food, compelling chefs to add more salt. Not to mention it’s an inexpensive way for restaurants to flavor your food. When eating out at a restaurant, it is hard to monitor the ingredients and how your food is being prepared, which often translates to high fat, high calories and too much sodium.

What is the most effective way to cut back on sodium? Don’t eat out as often. However, busy schedules, more hectic lifestyles and easy accessibility to fast and easy food have made eating out part of our food culture.

If you can identify ingredients that will add up to a high-sodium meal, such as condiments, salad dressing, salted butter, gravies and sauces, you can ask to have them left off or put on the side. These simple changes can turn what could have been a sodium minefield to a healthy, low-salt option.

When you’re trying to make healthy choices and are comparing nutrition information on menu items, be sure to include everything on your order. For example, when ordering a cheeseburger, the burger itself is a great low-salt protein, but the cheeseburger could also include a bun, cheese, ketchup and pickles, which are very high in salt.

Try to find out as much as you can about how each dish is prepared. Does the restaurant season its burgers? Does it marinate its steaks? Does it brine its chicken? Most restaurants do, and it is important to ask the right questions. Ask about rubs, marinades and finishing sauces. Does the restaurant make each dish to order or batch some of the meal ahead of time? Combination dishes such as soup or baby back ribs most likely have been prepared and have been cooking for hours, so it will be too late to ask for less salt.

The more you simplify your food, reducing the extra “layers,” the less sodium you will consume. It’s probably best to steer clear of the breadbasket, but if you do splurge, ask for olive oil with fresh cracked black pepper instead of salted butter. Build a relationship with the chef and get to know your local restaurants that are willing to adapt and customize their menu.

Mckenzie Ellis is the founder and owner of Low Salt Kitchen, a food blog specializing in low salt cooking. As creator of the Low Salt Movement and a wellness advocate Mckenzie helps raise awareness about the harmful effects of sodium on our body. As a community advocate, Mckenzie is passionate about raising awareness of sodium through community wellness programs, cooking...
Read More In My Profile