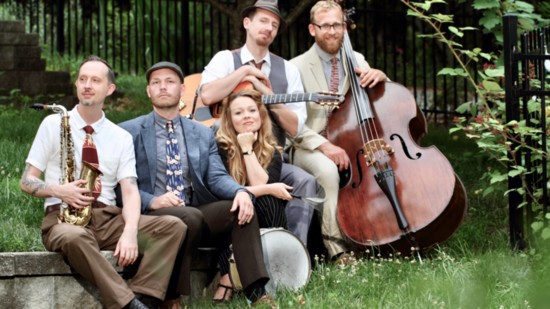 Queen Bee and the Honeylovers

Jazz, Storytelling and a Love for Asheville

Whitney Moore is the “Queen Bee” in Asheville’s most joyful swing band, and she’s thrilled to share her love of the city and its rich history through song. Each composition performed by her and her band is original, and it’s a tribute to all things Asheville. With songs titled “Beaucatcher” and “Helen’s Bridge,” it’s no doubt there’s a passion here that runs deep.

She reflects on a time when political divide didn’t carry such a weight, and she says she wants to use music and storytelling to bring us all together, no matter our backgrounds or political opinions.

“This album took a lot of my grandparents’ stories I heard growing up, local legends specifically from the jazz era, and every song has a different location or name of a person,” Whitney says.

“I’ve been really affected by watching our country become so divided and cutthroat,” Whitney says. “I don’t like that we’re demonizing each other. ... A big part of the inspiration for this album was my small attempt to bridge the gap and remind people of the fact that we have more in common than we have differences.”

Whitney makes it clear she isn’t trying to gloss over the trials of the past.

“The good ol’ days weren’t good for everybody,” she says.

Her hope is that telling stories of the past—some that many Appalachian natives share and others that are more personal to her—will unite people with a sense of togetherness through experience—and a little bit of dancing, too.

If you live in Asheville, it’s likely you’ve heard songs from Whitney's latest album. The band has been invited to play on multiple radio stations, and just last year, Queen Bee and the Honeylovers received the Asheville Music Video Award for Best Soundtrack.

“That was a high honor,” Whitney says.

If you get a chance to catch them, they’re a swingin’ good time and a lovely reminder that we share much of the same history, binding us together in a time it truly matters. They are fully booked for the remainder of the year, but for a calendar of dates, venues and more information, visit QueenBeeSwing.com.

Are you a fan of the NPR showThe State of Things? Check out Queen Bee and Honeylovers' chat with Frank Stasio at WUNC.org.