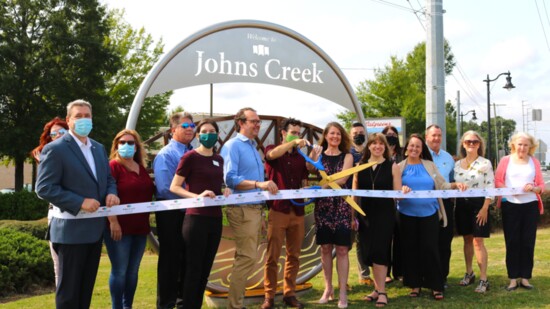 The Johns Creek Convention and Visitors Bureau (JCCVB) installed a beautiful artistic representation of the past, present and future of Johns Creek at the corner of Kimball Bridge Road and State Bridge Road. Artistically rendered by world-renowned artist William Massey in a joint creative process with the citizens of Johns Creek, the gateway marker is the first of several to be installed over the next several years at various gateways into the city.

Each image on the marker was carefully chosen to represent the input Massey gathered from the community meetings, and the overall design encapsulates the importance of the Chattahoochee River and the historic Rogers Bridge.

1. The seal of the Cherokee Nation represents the indigenous tribes who first called Johns Creek home, but also the nature that was here before any human ever arrived.

2. A Cherokee cabin was the typical dwelling in the area.

3. The broken arrow is Native American symbol for peace, as the land where Johns Creek currently sits was considered a no-fighting zone between the Creek and Cherokee tribes.

4. A feather not only a nod to the Native Americans but also the ecosystem and biodiversity found in the area.

5. A tear drop represents the trail of tears and eventual displacement of Native peoples.

6. The pickaxe and shovel symbolize the gold rush and subsequent influx of prospectors who flocked to the area (playing a role in the displacement of N.A. people)

7. Farming and agriculture was a huge part of Johns Creek's economy, the five-blade spring tooth cultivator reflected here can be found in the Autrey Mill’s Farm Collection

8. Cotton was the main cash crop in the area, accompanying broken chains represent enslaved African Americans who tended the land and their eventual freedom granted in 1865.

10. The Chattahoochee that runs along the southern border of Johns Creek, as well as McGinnis, Nesbit and other ferries who offered safe river crossing before bridges were built.

11. The collaborative community who makes up Johns Creek and even helped collaboratively guide this sculpture.

12. Oak leaf encapsulates the community's emphasis on the vast natural landscape of Johns Creek from the Chattahoochee to the Autrey Mill Nature Preserve and Heritage Center.

13. The symbols of languages shown here embody the amalgamation of people in present-day Johns Creek, the most diverse city in Georgia, bringing together numerous cultures, places of worship, and invaluable ethnic tradition.

14. Education is a vital pillar of Johns Creek’s framework and point of pride of its residents.

15. The Mill shown here not only represents the legacy of Autrey Mill but also those preserving, recording, and educating the history of this land.

16. The high rate of development and exponential multiplication of Johns Creeks infrastructure.

17. The growth of the culture of Johns Creeks, including the symphony orchestra, ethnic cuisine, festivals, arts, performance, and sports.

18. The value of not only education, but graduation and eventual return of younger generations to the city.

19. The pursuit of Johns Creek's commitment to technology that started in Tech Park and acknowledging that the focus on technology is an important part of where the city is headed.

20. A future of open and receptive hands for one another, new neighbors, taking care of the land, and the growth and progress that the future holds.

During the community engagements, the Chattahoochee and the historical Rogers Bridge was mentioned numerous times which inspired this overall design. The bridge is leading you from Johns Creek’s past into its future, whose history flows like the Chattahoochee. 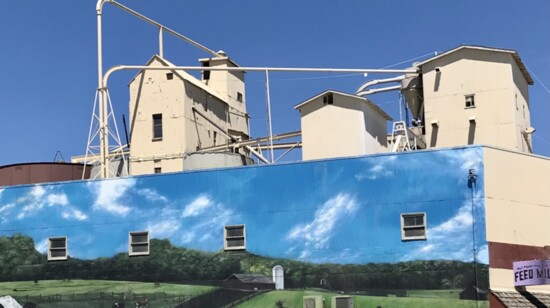