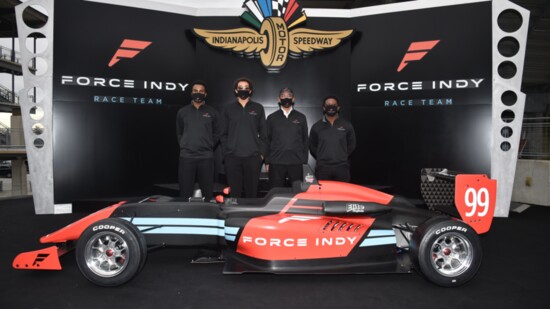 Force Indy is excited to announce its much anticipated first driver for the race team in 2021. Atlanta native Myles Rowe will make his debut as Force Indy’s inaugural driver in the Cooper Tires USF2000 Championship at the Barber Motorsports Park in Birmingham, Alabama, April 15-18.

South Fulton Lifestyle was first to sit down with the driver after the announcement.

How did you get started in this sport?

Since age 4, Myles Rowe has been fascinated with all things racing. He’s a winner in the 2018 Lucas Oil Formula Car Race Series. In 2016, he was awarded two “Search for the Champion” grand prize championships from the Federal-Mogul Motorparts’ iconic Champion® brand. At age 12, he won the ProCup Karting Championship during his first full season of racing. He’s competed in the TAG Junior category in the Superkarts USA, World Karting Association, and the United States Pro Kart Series. When he’s not racing, Rowe is a junior at Pace University, studying film and screen studies.

“I started at Andretti Indoor Karting in Marietta. I progressed really quickly. That was when I was realized I was really good.”

What advice would you give young people?

Myles said that it’s important to find your passion and get to work. “No one’s going to do it for you. Independent action will get you what you want but you might need some help.” Myles said that hours of dedication and research proved that he did indeed have this passion.

"We vetted many deserving young men and women and chose Myles based on his ability and performance, inside and outside of the cockpit,” said Force Indy Team Principal Rod Reid. “He understands Force Indy’s mission of building a diverse team of talented individuals. He’s a great fit for the team.”

Force Indy is a race team created specifically to develop talent with a diverse group of individuals, outside as well as inside the cockpit. The foundation of Force Indy is the racing background of Team Principal Rod Reid and a mentorship alliance with Team Penske—the most successful team in motorsports history. The team leadership brings years of experience from grassroots racing to the Road to Indy ladder system. The organization concentrates on developing skills that promote success at the highest level. Force Indy’s vision is to see motorsports grow ethnically, educationally, and across gender.