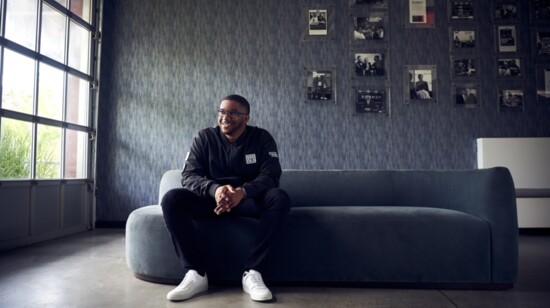 Ryan Wilson of the Gathering Spot

An idea that floated in Ryan Wilson’s head as a student at Georgetown Law School was catapulted into a mission in 2013: Create a community space for young Black professionals to convene, discuss the issues of the day, hold business meetings and socialize.

When George Zimmerman was acquitted of killing Trayvon Martin, Wilson was angered by the verdict, but also moved more than ever to make his vision a reality.

“No one’s coming to save us,” he texted T.K. Petersen, his friend and future business partner.

In other words, it was time to create what became The Gathering Spot, a multi-use private membership club in Atlanta that has grown into the largest private club in the city with 3,500 members.

Founded in 2016, Wilson and Petersen describe TGS as a “hub for collaboration connections and experiences uniquely positioned to build the future of what community looks like.”

The 25,000-square-foot facility is a haven for forward and creative thinkers to advance political and business ideas, develop and reinforce relationships and sometimes just to enjoy a meal and libation from its restaurant and gather with friends. Private events are held there as well, making it a multi-purpose facility.

The Gathering Spot has been such a coveted place that its membership, initially targeted for the young Black community, is multi-ethnic with members ranging from 21 to 80 years old.

“I wanted to be a lawyer my whole life,” said Wilson, who marched on the streets with Black Lives Matter in D.C. “But I was frustrated by what I saw in the law. It didn’t have the remedies I felt were needed to create the necessary change.

“And I was inspired by this concept I had in my head. I thought that through The Gathering Spot I could accomplish a lot of the things I wanted to as a lawyer. And we have.”

How highly regarded is The Gathering Spot? Through the pandemic that shut its doors, Wilson said it retained 99% of its members. He called the pandemic “a stress test for our viability. What Covid couldn’t take away is our inspiration and passion. And our members feel that.”

He and his team implemented virtual platforms through a system called TGS Connect, which allowed them to stay engaged with their membership although not in the physical space.

Meanwhile, in another show of sustainability, The Gathering Spot this year opened a location in Washington, D.C., a few blocks from the White House, and already has 1,000 members, Wilson said.

A space in Los Angeles is being built out for a third TGS location. Meanwhile, they are “building communities” in other cities, including New York, Chicago, Houston and Charlotte with the idea of opening The Gathering Spots there as well.

Wilson’s parents, Mark and Shelly—founders of Chime Solutions, a company that provides business process outsourcing services for small and to Fortune 500 companies—have been wildly successful entrepreneurs and inspirations for their son.

“It’s hard to become something you haven’t seen before,” Wilson said. “I have had the advantage of real counsel. And one of the things we want to do that’s important to us is help the next generation of entrepreneurs.”

It took three years and lots of rejection from potential financial backers for The Gathering Spot to open its doors. When that initial $3 million came in, Wilson, Petersen and other supporters maximized the investment.

A rewarding journey with no end in sight. “We will thrive because our competition barely likes a community that we love,” Wilson said. “The love and affinity here is strong.

“And we’re proud that we have become a part of the community and are making an impact in the city.”

The Gathering Spot is expanding to other cities!