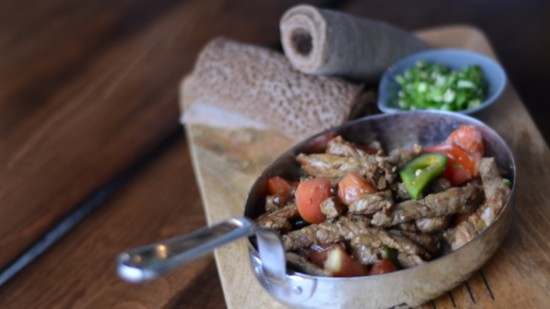 Authentic Dishes that Appeal to a Broad Range of Culinary Preferences

Feedel Bistro, which celebrated its one-year anniversary in September, brings authentic Ethiopian and Eritrean food to the heart of Midtown. Open for lunch and dinner, they also offer catering for small and large parties.

Owners and siblings Tamar Telahun and Simon Gebru were born and raised in Ethiopia and grew up eating their mother’s flavorful food. When they decided to open Feedel Bistro, they went first to the experts: their mother and sister. The majority of the recipes actually come from their mother, Meaza Habtemichael, who was born in Eritrea.

“Food is in our blood,” Tamar says. “I call my mom a chef, even though she doesn’t have a formal degree. She always loved cooking, and that is how she shares her love.”

The other recipes come from their sister, Abeba Telahun, who is a part-time chef at the restaurant. The other chefs have been trained to cook these dishes by their mother and sister.

The varied menu consists of entrees for meat-eaters and vegetarians, plus plenty for vegans. While growing up in Ethiopia, Tamar was eating vegan before she even realized what vegan was. It was only when she arrived in America in her early teens that she realized what the diet was called and how popular it was.

But, there are many dishes for nonvegans to enjoy as well. The number-one selling dish is Mom’s Special Gomen Be’siga, which is cubed lamb mixed with fresh collard greens and simmered in a mild sauce with seasoned butter, herbs and spices. The second is Sagla’s Spris, with a choice of tender meat or fish (beef, lamb, chicken or salmon), stripped and sautéed in a well-balanced red berbere sauce, with onions, garlic and tomatoes. Berbere is the number one flavoring in Ethiopian cooking. There are tons of spices that go into it after the pepper is ground. The third most popular dish, according to Tamar, is Doro Wet, which is a spicy stew and traditional delicacy with a red pepper sauce, cooked with an assortment of spices and served with one tender chicken leg, one hard-boiled egg and ayeb (homemade farmer’s cheese).

Tamar explains that nothing is precooked, unless it’s a stew that takes hours to make, and they use the freshest products they can find. This is not fast food; the dishes need time to cook in order to develop the rich flavors.

“Ethiopian food is becoming very popular. I think the vegan and vegetarian followers are really getting into the food by understanding and having an appreciation for it,” Tamar says. “Plus, it’s easy to digest and super clean.”

Feedel Bistro serves up healthy and delicious food without adding a lot of oil or salt. Because they use a lot of naturally grown foods such as beans, lentils, collard greens and cabbage in their recipes, many of the dishes are also full of protein and very nutritious.

“We are always in conversation about what and how we can make the food we already love better and push ourselves to be creative,” Tamar says.

The restaurant itself has a modern design, but when it comes to the food, they want it to be as authentic as possible. They actually want diners to feel like they’re in their mom’s kitchen.