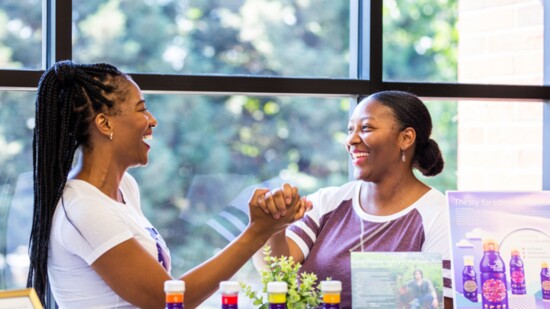 When Sandy Reid was pregnant with her second child, she suffered from a weakened immune system, nausea, and severe digestive issues. Finding a remedy was problematic, so she and her older sister, Sheylon Haywood, took matters into their own minds.

They used their college degrees in science—Sandra’s in Biological Sciences from the University of California Riverside; Sheylon in Kinesiology with an emphasis in nutrition from Cal State Fresno—to research and ultimately create a product that launched them into entrepreneurship. . . and solved Sandy’s morning sickness.

Sheylon used her certified mixologist skills to create a concoction featuring Peruvian ginger. She sent it from her home in Atlanta to her sister in California, and right away they knew she had found the elixir to her problems. Sandy’s symptoms diminished quickly, and in that healing came the discovery of Ginsation, a new drink that stands out for its healthy properties.

“Ginger is one of the most widely used spices for gut health and immunity,” Reid said. “Our belief is if a product states that it contains ginger, then you should be able to taste and feel the natural potency of ginger in your drink.”

Reid initiated the idea of creating a business and Haywood dove in, crafting four variations of Ginsation: Citrus Mist, Sunshine Burst, Cherry Delight, and Fresh Zest, an unsweetened vegan option flavor with only 5 calories. All are available at their website, www.drinkginsation.com, or Amazon.com.

Ginsation is fortified with organic Peruvian ginger, which is known to be naturally grown and, in some cases, untouched, from the Amazon Basin, allowing it to mature into a strong, spicy, and robust plant.

To launch, the sisters immersed themselves in research. They attended beverage conferences and workshops to familiarize themselves with the industry. And Haywood added, “We have been fortunate to have advisors that have not only helped us bring our product to market, but also were willing to help assist us through the marketing process as well.”

Haywood, who had been working as a high school Algebra teacher, quit her job to work full time as Ginsation’s Head of Operations. Reid works the business while maintaining her career in regulatory affairs in the pharmaceutical industry.

“It has been both fun and a learning curve,” Reid said. “Even though we are sisters we have different strengths, which makes us a great pair, but at the same time can be very difficult, which causes us to bump heads at times.” They self-funded their enterprise and are determined to help people with their drink.

“We are sisters with a passion,” Reid said. “A lot of consumers do not understand that what they choose to drink can help contribute to better health and wellness. We want to educate consumers to pay attention to the amount of sugar and carbohydrates being consumed in their drinks alone.”

Added Haywood: “Ginsation is an everyday problem-solver. It can be enjoyed chilled, warm like ginger tea, as a mixer, with frozen fruit to make smoothies, and as a pre- or post-workout drink. The taste and heat of ginger in each bottle is sure to give you a natural energy boost to carry you through the day.”