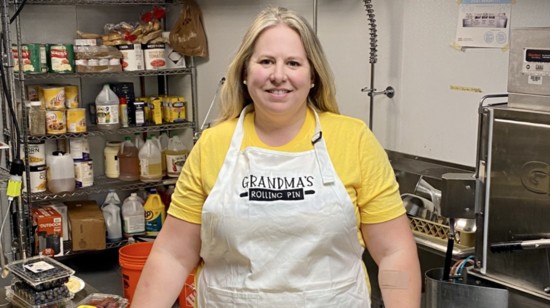 With a sprinkle of family magic and community support, a pie business was rolled out.

Maybe it was the sprinkle of magic only her Grandmother’s rolling pin could conjure.

Or maybe it was the timing of when she started her homemade pie business – the week before COVID shook our nation and the globe. Creating and delivering pies and baked goods was in high demand, instantly transported us to better days with one bite. No matter the secret, after meeting with Courtney Cutcher it’s clear, rolling out homemade comfort and love isn’t just in the pies she bakes, it’s within her as well.

Memories of her childhood swirl in and out of our conversation at the same speed Courtney is stirring up her homemade whip cream.

Her childhood Sundays were reserved for large family meals, time at Grandma’s house, playing with cousins, baking with aunts, with everyone in awe of the magic of Grandma Frances’s cooking. It was if every Sunday was Thanksgiving. People in the surrounding Ohio communities all knew of Courtney’s Grandma, and she says with a chuckle “My Grandmother was famous in our area for her peach pies… they might or might not recognize her personally, but they’d definitely recognize her famous tasting pie!”

So when Courtney, her husband, and her two kids Reghan and Collin moved to Dunwoody she decided to share the magic of the rolling pin she inherited from her Grandmother and opened the super-successful business, Grandma’s Rolling Pin. Her goal was simple – to create pies and cookies as close to those she remembered from growing -  homemade, everything from scratch,  like Grandma would make. The opportunity arose to partner with the owner of Piedmont BBQ, Brad Coolidge. He was the perfect person to join forces since he was already catering and delivering delicious North-Carolina style BBQ to the Dunwoody and Metro-Atlanta area.

Courtney is a stickler for baking from scratch, and warns, “people come to me for the taste, definitely not the decorating. I joke I’m not the best at that. But if they want taste, I’ve got something for them!” And after personally tasting her key lime pie (and by “tasting” I mean eating half a pie…) I can attest to her success. It seriously reminded me of summer, my Grandma’s picnics, and of my trip to Key West, and of dancing. And again I was transported instantly from the swirling of emotions and feelings -  everything that only good food brings.

From peach pies, to Buckeyes (a nod to her home state Ohio), key lime pies, cinnamon rolls, German chocolate pies, chocolate chip cookies and more, Courtney knows her Grandmother Frances is smiling down at her from heaven as she carries on the baking legacy. Due to the global pandemic, Courtney and her family decided that moving back home to Ohio was the right decision for now, and will miss the Dunwoody community dearly. And once she gets settled in Ohio, don’t be surprised if I’m the first on her list for mail-orders.

Humbled knowing that at a time we all just needed to feel a little more love and comfort, Courtney was able to bake and deliver it boxed up with her from-scratch made-with-love Grandmother inspired creations. And I’m certain, her baking magic will make memories for future generations to come.