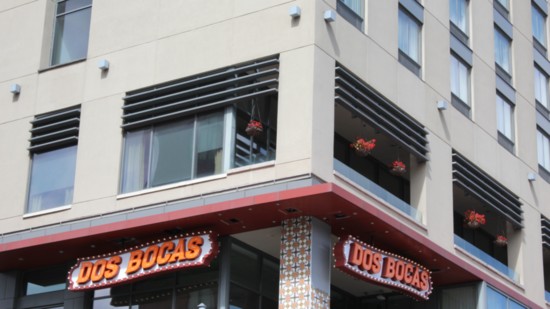 Legacy Ventures, a 25-year-old hospitality company with almost 1,000 employees, develops restaurants, hotels and mixed-use developments. It is based right in downtown Atlanta. Most of their properties are actually in Atlanta, and a good amount are right in the Centennial Olympic Park District.

In 1999, David Marvin, Legacy Ventures' president, was awarded the 1999 Spaulding Award from Massachusetts Institute of Technology (MIT) for his part in the revitalization of Atlanta with the development of the Embassy Suites and condominium complex near Centennial Olympic Park.

“It’s threading together the tastes of the Gulf Coast with those kinds of spices and flavoring you would expect from Tex-Mex and Cajun food,” says Jeff Sime, vice president of operations for Legacy Ventures.

There are also a variety of alcoholic beverages that pair well with the dishes. The large bar has plenty of tequila-based cocktails such as the Classic Avenue C margarita with agave and fresh lemon, the Roadside Cantorita, containing fresh squeezed citrus, grapefruit, soda, salt and tequila in an oversized custom-made mug, Prickly Pear margaritas, and Lone Star margaritas, plus Sazeracs, Hurricanes, daiquiris and of course, fruity sangrias. For beer drinkers, there’s Dos Equis Ambar, Mucha Lucha Lager, Corona, Sam Adams, Miller and many more.

The cuisine of Dos Bocas was the inspiration of Brian Bullock, the chief operating officer of Legacy Ventures, who at one time was in charge of running restaurants in Houston and New Orleans, where he developed a love of the cuisines, and Chef Christopher Blobaum, vice president of culinary for Legacy Ventures, who has worked in Texas and has also spent time in New Orleans.

When they realized they wanted to open a restaurant serving both Tex-Mex and Cajun, the two, along with Jeff and corporate chef, Matt Decker, went on a five-day road trip all the way from New Orleans to Corpus Christi and Puerto Ramses. Jeff says they ate their way through all the cities, trying to find the right dishes they wanted to serve in the new restaurant. They frequented not only other restaurants but also truck stops and little roadside taco stands.

In Louisiana, they made a stop on Avery Island, where they make Tabasco and hot sauce, to find some that were just right for their restaurant. The group also traveled to Mexico to pick out the tequila that they would be serving in their cocktails. They did a lot of research to find the best ingredients and dishes to use in Dos Bocas, and they covered all this land in only five days!

“There are a lot of things on the food and drinks menu that were inspired by our road trip,” Jeff says.

Designed by ASD|SKY, another Atlanta firm, the 8,000-square-foot, two-story restaurant includes a patio overlooking the new green space at Centennial Olympic Park, which is right across the street. The décor is fun and festive, with its mix of Texas, Mexican and New Orleans influences. The commissioned artwork hanging on the walls shows Mexican, Texan and Louisianan themed images, and a unique and whimsical wall collage of all things Mexican, Texan and Louisianan is a highlight in the restaurant.

The venue is also available for private events such as holiday parties, school reunions, sporting events or cocktail receptions. There’s a semi-private dining room that can hold up to 20 guests, or a bar area that can fit up to 60. For a much larger party, they will rent out the whole restaurant, which can hold as many as 350 guests.

“It’s really bringing quality Tex-Mex food and something different in a Cajun restaurant as well, which is something that downtown Atlanta does not have,” Jeff says.

Dos Bocas is conveniently located in Legacy Ventures’ Park Pavilion mixed-use development in downtown Atlanta and is near several popular attractions. It's within walking distance of the CNN Center, World of Coca-Cola, State Farm Arena Georgia Aquarium and the College Football Hall of Fame.