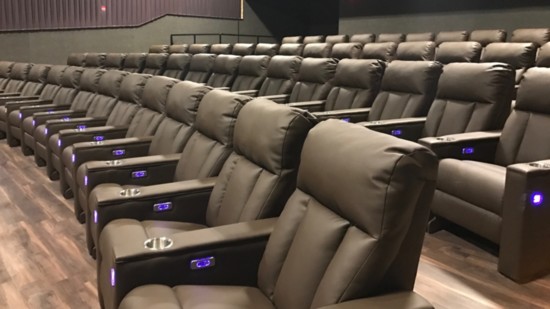 Who doesn’t love going to the movie theaters with the super comfy recliners, reserved seating, and get this… heated seats!  Many of us were recently excited when the old LaFont theater was purchased by Brandt Gully, an East Cobb resident, and saw a complete overhaul to turn a beloved local spot into one of the premiere cinemas in Atlanta that you see today.

Gully, besides being a really likeable guy, is a movie theater financial advisor to cinemas throughout the country. LaFont was a previous client, and Gully remarked to his wife and daughters that if LaFont would ever want to sell his Sandy Springs theater, Gully had the dream of buying it.  Not only did Gully love this particular theater, but he was also inspired by the tremendous growth within the community.  So, when the opportunity finally came, Gully and his family knew they had to make the dream a reality.  Gully says, “Although I wasn’t looking to get into operations, nor was my family, if there ever was a place to do it, I knew it would be this place.”

Building a premiere cinema in the community was important to Gully and his family, as they know firsthand how important community can be.  A few years back, their eldest daughter was diagnosed with leukemia, and their world was turned upside down.

Gully credits as inspiration both their community and people at the hospitals who had helped their daughter over the year and a half cancer fighting process.  He remembers in particular being at the hospital while his daughter was going through a bone marrow procedure where it came to him clearly… the stark realization how selfless and dedicated the workers at the hospital were and how much they were contributing to making the lives of others better.  He felt charged to build something within the community that would serve as roots for him and his family, as well as give a place of enjoyment to help make this community even better.  Thankfully now his daughter is in remission, and that charge to build roots in the form of The Springs Cinema & Taphouse is holding firm.

All of us remember the old LaFont theater for its cinematic pictures, and The Springs Cinema & Taphouse continues that tradition.  Owner Gully says, “One thing that we won’t be changing at The Springs is the quality of the films. Lefont was always known for great movies, and we plan to maintain that while expanding the programming to incorporate more family films and alternative programming to include throwback movies, classics and special screenings. The great movies will still be here; we just want to give you a better atmosphere to enjoy them.”

And the atmosphere is certainly incredible with the many renovations completed and the few more being completed right now.  Gully’s first step was to overhaul the eight-screen theatre with the city’s only heated luxury recliners.  And as someone who has now made this their go-to place for movies, I can tell you first hand--GAME CHANGER!  They also upgraded the sound system, replaced and enlarged the screens, renovated the restrooms and replaced the air conditioning system. The lobby will also be updated with all new finishes, a completely rebuilt concessions area with enhanced food offerings, and the addition of a full bar featuring a wide variety of craft beer, cocktails and wines this month, just in time for the holiday season.

There’s something just heartwarming about a family-owned business in a family supported community like ours, and The Springs Cinema & Taphouse is no exception.