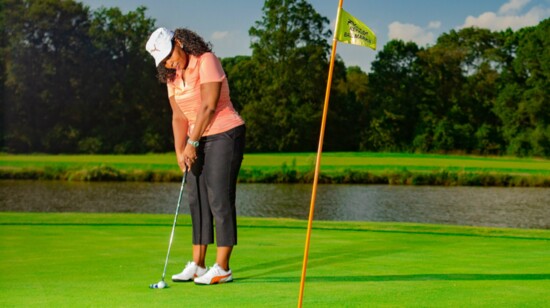 The City of South Fulton, or #SOFU, as it’s called by those in the know, is quickly becoming a hotspot, thanks to Certified Tourism Consultant Chantel Francois. The next time you check out of a hotel room, pay close attention to the bill. Tax—it may not mean much to you, but to Francois, it is just what she needs to execute her magic at the South Fulton Convention & Visitors Bureau. Francois is SOFU’s own secret dynamite, taking taxes generated from hotel and motel bills and churning them into concrete success. Her efforts have aided in shining the light on the City of South Fulton, the third largest city in Metro Atlanta.

Former mayors of Atlanta Bill Campbell and Shirley Franklin, the Prime Minister of Antigua and Barbuda, Air Jamaica, Delta Airlines, and UNCF have all benefited from the power Francois brings to the table.

A Certified Tourism Consultant with a resume that compares to none, Francois relocated to Atlanta with the Canadian Consulate in the Office of External Affairs over two decades ago. She recently returned to Canada as the mastermind behind a tourism master plan for the City of Mississauga, Ontario, Canada’s sixth largest city, sharing her expertise and passion for tourism to catapult the number of tourists in the area. She also shared and outlined plans for the creation of a Convention & Visitors Bureau as an economic driver to generate revenue. Francois employed these same skills when she was recruited by the twin isles to implement and head the Trinidad and Tobago Convention & Visitors Bureau.

Before SOFU, Francois marketed the City of East Point and the airport at the Atlanta Convention & Visitors Bureau and served as President and Founder of the Metro Atlanta Caribbean Chamber of Commerce. It was through her connections that Atlanta, Georgia’s capital united with its sister cities Jamaica and Trinidad and Tobago along with several other Caribbean islands, including St. Lucia and Antigua and Barbuda. Her efforts and tourism marketing skills supported successful nonstop flights aboard Air Jamaica and Delta Airlines from Atlanta to these scenic Caribbean destinations. Francois also built partnerships with Marta and Sheraton Hotels to bring more tourism to Atlanta.

The next Georgia city to have the honor of Francois’ magic wand was the City of Douglasville, located 20 minutes from the Hartsfield-Jackson International Airport. While in Douglasville, she was committed to positioning the city as a premier destination for small-market meetings, corporate business, and conferences as well as an attractive leisure destination.

Although SOFU is only three years young, one of its newest departments, Tourism, led by Francois, has already brought awareness to some of the city’s hidden gems. Francois was recently interviewed on Fox5 Atlanta showcasing Boat Rock Preserve, a favorite destination among rock climbers and outdoor lovers throughout the southeast. She plans to create more new and exciting partnerships, events, and festivals to highlight the city and its other tourism sites.

Even the COVID-19 pandemic could not halt the power that is Chantel Francois. She worked to assist the hospitality community by supporting the City’s restaurants during this time, partnering with the South Fulton Chamber of Commerce to provide daily meals to the City’s frontline workers during the hardest hit months early on. The City’s main hotel, Fairfield Inn & Suites, managed to stay afloat, thanks to group stays from Walmart, Google, and Amazon that housed their employees in the comfort of the Marriott Hotel.

Francois’ goal is to position SOFU as a premiere destination for corporate, leisure, and group travel, bringing awareness to all of its amazing tourism products, keeping SOFU top of mind, and being a  catalyst for economic growth.

Francois’ accomplishments at a glance: YWCA Women of the Year, Atlanta Business League Top 100 Women, 100 Most Influential Caribbeans in Atlanta, Who’s Who in Atlanta, 100 Most Powerful & Influential Women in Atlanta, and Atlanta Airport Rotary Club member, where she served as director of public relations. In her spare time, Francois enjoys decorating her home, traveling, and spending time with family.