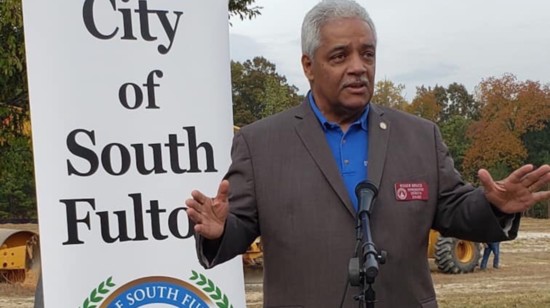 The Godfather of South Fulton

Roger Bruce grew up without a close father figure, until one day as a Morehouse College student, he heard a black man talking inspirationally about the things that could be achieved if the community worked together. After the meeting, Bruce introduced himself to a young Maynard H. Jackson, Jr., soon to become one of the most prolific Atlanta black mayors in the 1970s. Now, several years later, Bruce is part of building a similar vision of black equity and economic empowerment in the City of South Fulton.

A political science major then, Bruce started interning for Jackson’s law firm and eventually got involved in his mayoral campaign. Bruce remarks he’s been involved in politics ever since. Bruce has been an elected state representative since 2003. During this time, the husband and father of three has advocated on behalf of children, the elderly, and other constituents, developing a passion for these groups from his own upbringing in Harlem, New York.

Though he says his aunt who raised him was wonderful, he grew up without his parents. Most people he knew were raised in single-parent households, he notes, mentioning how it was common to see families broken up for various reasons. His life’s work has been trying to find a way to make up for what he and those around him didn’t have as children. Consequently, he’s supported legislation for strong families and community resources once stepping into office.

Rep. Bruce soon went from facilitating ways to aid people on an individual level to seeing the possibility to forge a type of community wholly supportive of its residents. This would eventually lead to the creation of the City of South Fulton. Rep. Bruce describes how necessary the action was, saying that some of it was born out of the reality that they were being governed by people who did not live in the area.

"They didn’t have to live with the consequences of their decisions," Bruce says. According to Bruce, Atlanta wanted to annex pieces of the area, an action that would have caused schools that serve the areas where he lived and portions of South Fulton to close.

“You close the schools in a community, the community goes down,” he says. He didn’t want that to happen.

Rep. Bruce adds there was another, more profound reason for cityhood. He wanted to establish a place where if black people wanted to have their own businesses, then they would have someplace to do that. The City of South Fulton exists with a remarkable African American mayor and city council who all live within the city limits. It’s also 90% African American, spanning 170 square miles and with a median family income close to $60K. But the City of South Fulton is just getting started. And Rep. Bruce says he wants to see a place with opportunities to grow and develop generational wealth for families to come.