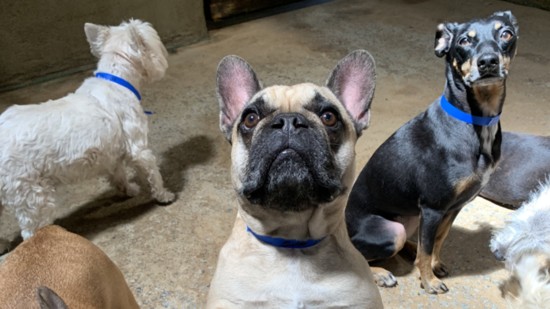 A Special Place for Dogs and Their People

A Business Owner’s Commitment to His Community

When William Campbell, a marketing and brand consultant, was looking for a new job in 2002, his biggest concern was what he was going to do with Sebastian, his 75-pound, 7-year-old very active Dalmatian. William was used to working from home with his dog by his side.

He started researching and found there weren’t any good options. Dog walkers weren’t that prevalent in the area back then, and the other choices involved leaving Sebastian in a crate for long stretches of time. During this period, he realized there had to be a better way.

“I took off my human hat and tried to think about what dogs would like,” William says.

He then set about creating a safe place where dogs could run, relax and play. In November 2002, Piedmont BARK opened its doors, and Sebastian loved going to work with his human until his passing at the age of 15.

“I tell people all the time that I’m the luckiest guy in the world because I’m actually doing something that I love and have a passion for,” William says.

Piedmont BARK offers doggy daycare, boarding and grooming. Since Sebastian loved open areas to run and play, they make sure they provide that for every dog that comes in.

“Everyone that comes into Piedmont BARK entrusts their dogs with us because what we offer is a safe, secure environment, like their dog has at home,” William says. “The big difference is their dog gets to socialize and play with dogs of similar size, temperament and age. Since our inception, we’ve strived to safeguard all the dogs that are entrusted in our care. I mean, these are people’s babies. So, when they’re in our care, they’re our extended family.”

Living in Midtown for 20 years and owning a business for 17, William has deep ties to the community. And he especially likes helping others.

“When I set out to open the business, from day one, it was part of my commitment to give back to the community. It’s really important to support local charities and to be involved as much as possible,” William says.

In March 2003, Piedmont BARK held its first Yappy Hour, a fundraiser that gives its human customers a chance to mingle with each other while listening to music and enjoying hors d'oeuvres and the open bar. That night, more than 200 people showed up, and Yappy Hours have been held ever since.

Piedmont BARK raises money for many local organizations, but its two main charities are Project Open Hand, which feeds the terminally ill; and Pets Are Loving Support, which cares for their pets. Food, veterinary care and medications are taken care of so they don’t have to choose between paying their medical expenses and keeping their pets. This year, Piedmont BARK is also sponsoring the Fur Ball Masquerade, Nov. 1 at the Fox Theatre.

The Shepherd Center in Atlanta, which specializes in spinal cord and brain injury rehabilitation, is another recipient of its fundraising efforts. Piedmont BARK also supports Canine Assistance, which places therapy dogs with individuals in wheelchairs.

Piedmont BARK’s next fundraiser will be Photos with Santa, which will raise money for a local charity. It’ll be held on Nov. 13, from 4:30 to 7 p.m., and people can bring in their dogs and their human kids too. Canine and human treats will be served, along with wine and soft drinks.

“Business owners need to recognize that their existence is dependent on the community they serve,” William says. “Everything they invest in their communities will come back to them time and time again.”