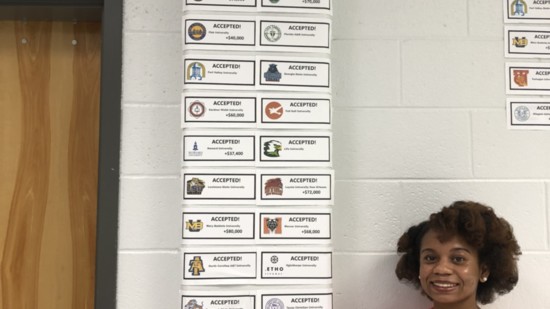 Westlake Graduate Becomes an Online Sensation After Being Accepted Into 31 Colleges and Being Offered Nearly $1 Million in Scholarships!

Unless you have been living under a rock, you might have heard or read about Kayla Willis, the South Fulton teen who was accepted to 31 colleges and received nearly $1 million in scholarships.

Willis, a Westlake High School graduate, has been accepted to colleges and universities across the nation, including Texas Christian University, Loyola University New Orleans and Spelman College.

Kayla was uncertain about which college to attend when she started her senior year at Westlake last summer. She also was responsible for paying college application fees, which can deter youth from applying for higher education. After speaking with an admissions representative from Full Sail University, who informed her about college application fee waivers, she made a list of schools she was interested in based on her major and applied.

Willis likened her college applications to a science project and made sure her school choices were diverse. She applied through the Common Application and requested fee waivers for every school.

She considers herself to be well-rounded, which makes her a viable candidate for many schools.

“Someone like me can get into these types of schools,” Willis said. “Most schools look at you as a person rather than just my SAT or ACT scores.”

Kayla received most of her acceptances last winter and had to make the difficult decision on which school to attend. She ultimately chose Fisk University, where she will major in Business Administration with a concentration in International Business. She also chose Fisk because of a dual major option and the fact that students are offered an opportunity to study abroad.

Willis has received tons of support from her peers and on social media. She admitted the past year has been a whirlwind.

“It’s been a ride!” Willis said. “I went from a regular kid to a local celebrity.” She added that the attention she has received has been what she describes as “crazy, but a blessing.”

“I’m glad that this happened at this time because I’m really setting myself up for my future,” Willis said.