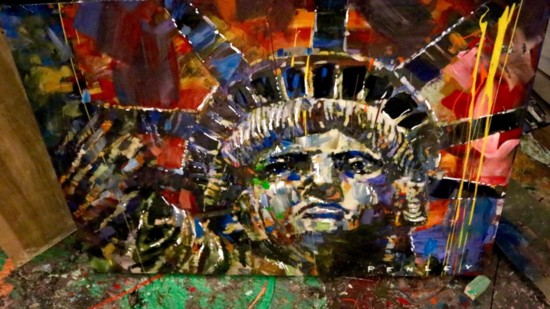 The Inspiration Behind Penley

Honoring Our Country One Painting at a Time

You would expect to find paint splatters and drips in an artist’s studio, but walking into Steve Penley’s studio in Atlanta is like walking right into an abstract painting. This is what he actually set out to do upon moving into the new space last August. Nothing is spared a whimsical coating of paint—furniture, instruments, floors, walls, ceilings, and of course, the artist himself. He is literally immersed in his passion.

Born in Chattanooga, Tennessee, in 1964, Penley knew he was meant to be an artist from a young age and took art classes while growing up in Athens and then Macon, Georgia. Thanks to his middle school industrial arts teacher David Cornelius, he was even able to build his own canvases. When asked if he still does, he responds, “I do until the people that work for me make me stop. I love building stuff.”

Later, he studied at the School of Visual Arts in New York and at the University of Georgia. After graduation, he took some odd jobs while continuing to paint, but it wasn’t until Robert Steed, an attorney and art enthusiast, saw his work that his career finally took off.

In talking about Steed, Penley’s quirky and fun sense of humor comes through.

“Robert L. Steed was the first person other than my parents to pick me up out of the gutter, hose me down and give me a check. He was a partner at King & Spalding, which also played a pivotal role in the direction of my career and had it not been for those two factors, I would probably be a piano delivery guy in Macon or a convict in hopefully a minimum-security white-collar prison,” says Penley. (His father was a piano salesman.)

The bold strokes and vivid colors of his historical icon paintings are instantly recognizable as Penley’s, and his works are exhibited around the world. George Washington, Abraham Lincoln and the U.S. flag are some of his best-selling subjects, with the Statue of Liberty being number one. The flag painting shown on this magazine cover is quintessential Penley.

When asked how he developed his style, he tells a story about a friend who asked him to cover the walls of his new restaurant with paintings and gave him less than four days to do so. Not having any idea what to paint, he fell back on his second favorite subject—history.

“At that time, my fascination with history, especially WWII and the events surrounding it, was what led me down the road towards painting historical icons. I defined that inspiration more over the years, and it has become more about celebrating this country and trying to convince others that this is the greatest nation on earth and what made it that,” says Penley.

This is why his favorite painting is Washington Crossing the Delaware, which hangs in the U.S. Capitol. “I love the original painting that I ripped the subject off from. And, I like large-scale paintings. I also like the heroic theme of the painting which reflects my feelings about our founders and this country,” says Penley.

Known the world over, this self-deprecating artist keeps things down to earth.

“I think my popularity stems from the fact, much more than talent, that I share a common bond with my customers in my interest in historical figures. I choose my subjects by how interesting or how non-interesting the subject’s face is and their overall influence in American culture to the point that most anyone would be able to at least recognize and relate to that icon in some way,” says Penley.

Bursting with ideas, Penley believes there is no way he’ll ever be able to get them all down on canvas. He says he has painted practically anything and everything—portraits of kids and pets, including someone’s bird.

Throughout his career, he has developed products for Fox News, Coca-Cola and several U.S. presidents. He has also penned multiple books and has done illustrations for others including those authored by Coach Vince Dooley from the University of Georgia, his alma mater. In fact, in Atlanta, he is also well known for his paintings of the coaches, players, and places of the university.

He donates scores of paintings to various charities and organizations in and out of Atlanta and feels it’s a particular honor to support those that assist active members of the military and veterans.

His other joys in life are his talented children—Lyall, Abbey and Parker. “I don’t know where they derive this talent because they really never ask me tips about art. I think they just grew up knowing it was something you do when you are a Penley.”