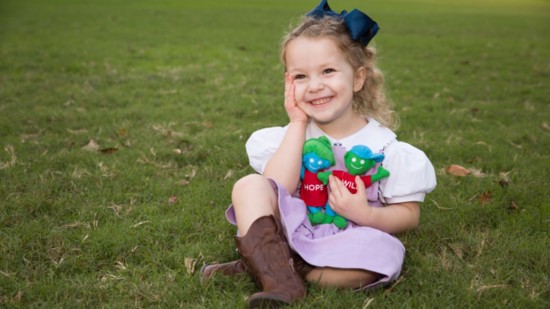 Happy, spunky, and feisty are three words that describe 4-year-old Caroline Brewer. While spending a good amount of time keeping her two older brothers in line, Caroline loves going to preschool, playing with her friends, and practicing ballet. In addition to that, Caroline is fighting a battle that no child should ever have to face.

In  2017, Caroline’s parents noticed her hands shaking and took Caroline to her pediatrician who ordered an MRI as protocol to rule out any larger issues.

On the day of the MRI, Caroline won over the nurses and everyone loved playing with her. About 40 minutes into the scan, the doctor walked back into the room with a dismal face. He told Matt and Jamie Brewer that their daughter had a softball-sized brain tumor, and that he was 99% sure it was cancerous. Over the course of the day as they met with a variety of specialists at Children’s Healthcare of Atlanta, they were told that Caroline’s surgery was critical, Based on the location of the tumor, doctors said that if Caroline survived the surgery, she would mostly likely be both paralyzed on her left side and blind in both eyes.

After an eight hour surgery, Caroline’s parents rushed to her bedside, only to find her sitting up saying, “Hi, Mommy and Daddy!”

Caroline was diagnosed with Anaplastic Ependymoma, a rare aggressive brain tumor. She needed an advanced type of radiation--proton radiation--and she received 30 rounds of daily radiation treatment.

After returning home, Caroline was doing well, was back to school, and acting like a healthy 4-year-old. Caroline’s mother even received a phone call from her neurosurgeon, Dr. Andrew Reisner, asking if he could nominate Caroline as his miracle of the year story and she was featured in a Children’s Miracle Network video, “2018 Miracle Child.”

A week after her video was filmed, Caroline went for her six-month follow-up MRI. The scan showed the tumor was back, this time as a High Grade Glioma. Caught early, Caroline was set to have another brain surgery. Once again, Children’s surgeons were able to remove the entire tumor. At this point, there are currently no official guidelines to treating this aggressive cancer. Caroline was accepted into a clinical trial through the Aflac Cancer and Blood Disorders Center of Children’s Healthcare of Atlanta. She completed another 30 rounds of radiation and is currently on immunotherapy and chemotherapy. Her last scan was stable.

Now, if you didn’t see Caroline’s missing patch of hair, you would never realize what a tough battle she is fighting. Life can change instantly, and it definitely did for the Brewer family. Jamie’s company suddenly announced they were laying off her entire sales force. Kendra Scott offered to have a fundraising party for the family and at that event, Tina Fowler of Polo in the Pines introduced herself to Jamie Brewer.

She told Jamie about the Polo in the Pines mission and shared that her own mother fought cancer for more than 20 years.  She explained that 100% of Polo in the Pines fundraising benefits brain cancer research at Children’s Healthcare of Atlanta. Jamie was inspired and wanted to be involved with the event.

Polo in the Pines is a two-day charity event on October 13 and 14 full of polo matches, food, beverages and philanthropy, and this year Caroline is the honoree.

“If Caroline’s story compels even one person to donate, that's important.  Because pediatric cancer only receives 4% of federal funding, donations provide funds and funds are what will lead to a cure,” says Tina Fowler.

Sponsorship opportunities and tickets at PoloInThePines.com.