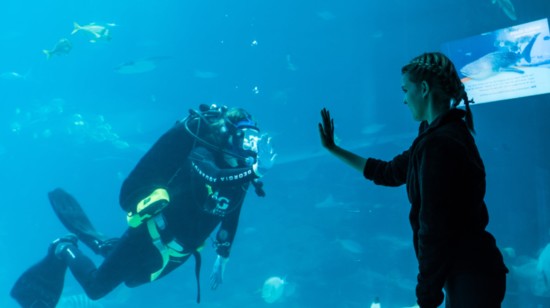 Photography by Courtesy of Georgia Aquarium

Being landlocked as we are here in Atlanta everyone knows about Georgia Aquarium.   It is hard to forget that there are so many incredible exhibits and habitats that contain literally thousands of ocean species living right in the heart of our great city.

Cherie Everhart of Alpharetta, a volunteer at Georgia Aquarium since 2007, jumped right into her volunteer experience by diving in and cleaning the exhibits as well as assisting the Tropical Diver team collecting water samples, prepping food and feeding some of the incredible inhabitants.  Her favorite dive is Ocean Voyager but she thinks that she has done every divable habitat at Georgia Aquarium.  You might even see her feeding the Giant Pacific Octopus on your next visit. It is her work and that of other talented volunteers that make the Aquarium stay afloat.

Aquarium volunteers and staff are passionate about their work. Katelyn Herman, a member of the research and conversation team at Georgia Aquarium, laughed when she told me that she first became intrigued by the oceans after watching Free Willy when she was only 6 years old.  Many years later, after focusing her studies on marine conservation and policy, Katelyn began working at Georgia Aquarium.  Three of her top conservation projects at the aquarium and the ones that she would like everyone to know about are the South African Foundation for the Conservation of Coastal Birds, the Coral Restoration Project and the Shark Conservation Fund.  It is key strategic partnerships such as these that make Georgia Aquarium a global leader in research and conservation.

The South African Foundation for the Conservation of Coastal Birds and Georgia Aquarium partnered to do the first-ever assessment of African Penguins.  A fan favorite at Georgia Aquarium, African Penguins are considered to be an endangered species. This study and their ongoing work allows for a greater understanding of the health and environmental issues facing the penguin population and how best to prepare for their future.

As our global assault on coral reefs continues, Georgia Aquarium and the Coral Restoration Fund are rising to meet the challenges of this crisis ensuring the future of these incredible ecosystems. This initiative is currently working to grow coral pieces in an underwater nursery in the Florida Keys.   This project, among others at the aquarium, continues to rescue, grow, and transplant healthy and strong new coral where it is needed in hopes of giving our coral reefs a fighting chance of survival in their unique and dynamic ocean environment.

The sharks are coming to Georgia Aquarium late this fall and with that more research and study into the least understood creatures of the oceans.  The Shark Conservation Fund and Georgia Aquarium are working on the Global Shark Trends Program to reassess over 1250 species of rays and sharks that are known to live in our oceans.  Every shark from the most common Spotted Blue Ray to the little-known Chimaera or Ghost Shark is being studied so that we can make the best decisions on conservation for the entire planet’s population.

These are exciting global projects that are happening in our own back yard. Georgia Aquarium has many ways of supporting these efforts on a local level through engaging activities such as Science on Tap, a cocktail party with a science-themed lecture and, Aqua Vino, an incredible evening partnering delicious wines with local cuisine.  Georgia Aquarium is leading the way globally and each of us can do our part to help by having some fun here at home and supporting their work globally.

It seems that the oceans are really not that far away after all.