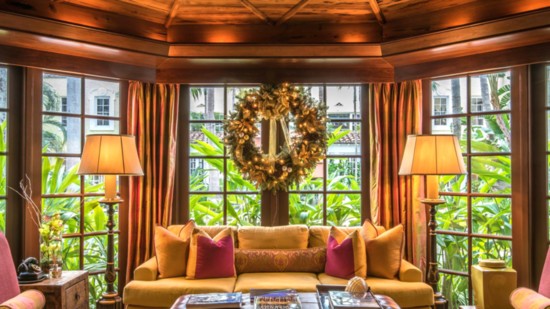 Rounding the corner onto South Lake Trail in Palm Beach on my pink Lily Pulitzer cruiser, I was met with a parade of palms on one side and a sharp wall of hedges on the other. The Lake Trail runs for 5 1/2 miles along the western side of the town, overlooking Lake Worth Lagoon across to West Palm Beach.

That morning, dog walkers and nannies shared the path with slow but deliberate walkers, an occasional jogger and well-preserved older women in good looking tracksuits. Most were caught up in their own thoughts, which was fine, because I was entranced with the story-high hedges hiding the mansions that lined the path.

Some were curvy and undulating, doorways precisely trimmed out revealing pretty wrought iron doors bejeweled with cut glass or gold ball accents. Others were boxy and sharp, trimmed high and tight like a new Marine recruit. Pink bougainvillea dotted 10-foot tall boxwood walls with bright white concrete ledges wedged in like Legos. Twenty-foot waving palm trees popped up like toast from thick hedges that stair-stepped up to the blue sky, all meticulously designed and religiously manicured to hide the sprawling homes beyond.

Catching a glimpse of a hot pink stucco ranch was my reward for pedaling slowly. I tried not to gawk. It’s hard not to in Palm Beach.

Opulence oozes from grand homes built during the Gilded Age and beautiful people spill out of the designer shops along Worth Avenue. But, there’s more to Palm Beach than just riches and treasure. In Palm Beach County, 47 miles of Atlantic coastline play host to sunbathers and water sport enthusiasts. In West Palm Beach, there is a growing foodie scene, with festivals galore attracting sports fans, artists and partiers.

We joined the West Palm Beach Walking Food Tour, stopping at six different restaurants over three hours, meeting chefs and tasting their signature dishes, learning about the community’s history and revitalization along the way.  There’s also a Historic West Palm Beach Neighborhood Food Tour, cooking classes and private tours offered by these entrepreneurs in the know.

The Flagler Museum is probably one of my favorite museums ever. Completed in 1902, this 100,000 square-foot mansion is magnificently preserved, full of sumptuous furnishings across 75 rooms. The façade of Whitehall is marked by massive marble columns and topped with a red barrel tiled roof. Built around the central courtyard, the house consists of two floors, an attic and a basement. Flagler’s private Railcar No. 91 is exhibited in the courtyard. The interior and exterior of Railcar No. 91 car have been restored to the original 1912 appearance, when Flagler traveled by this railcar along the Over-Sea Railroad to celebrate this phenomenal engineering feat and the completion of the FEC Railway from St. Augustine to Key West. Take the audio tour at your own pace. You will want to circle back to your favorite rooms.

Stay at  The Brazilian Court Hotel with a Beverly Hills feel. You’ll hear conversations in French and Italian in hushed tones in the small lobby, where plum velvet sofas look out into a courtyard, a cocoanut grove framed in white begonias. Tidy white canvas cushions upon black rattan furniture around a fountain beckon. It’s  much more intimate and private as compared to the grand dame down the street, The Breakers, the only longer running hotel in Florida.

The Brazilian Court is home to Café Boulud, from internationally acclaimed chef Daniel Boulud. Sit on the shady patio for lunch and order the curried squash soup with lie yogurt, apple and cilantro and a cubano with yucca fries.

Book an appointment at the unassuming Kaffee’s Garden Spa in West Palm Beach, celebrating 20 years in business. My therapist, Tanya, found every knot, her touch reassuring and confident leaving me invigorated and relaxed.

If you visit around the holidays, watch for the tree lighting ceremony on Worth Avenue. Santa arrived in a Lamborghini, of course.