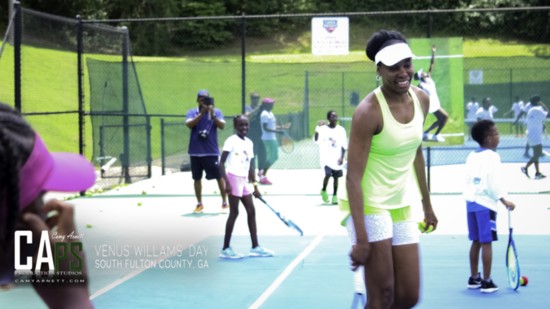 Seven Time Grand Slam Winner Gets on the Courts with Students

Tennis legend Venus Williams surprised over 100 campers at South Fulton Tennis Center. Williams, who was in town for the BB&T Atlanta Open, went straight to the courts upon arrival at the center to hit with the campers.

“More than anything, I enjoyed spending time with the kids here. I’d love to come back,” she said.

Coach Sam Kennedy, the center director and executive director of the South Atlanta Community Tennis Association said, “Big things are happening here! We’re very happy to have her with us. We call it Venus Williams Day! It’s right in line with our vision for partnering education and tennis.”

South Fulton Mayor Bill Edwards and District 3 Councilwoman Helen Willis were on board for the event as well.

Mayor Edwards stated that the city was supporting construction efforts for the center. “We have courts to repair and lights to replace. We’re moving forward to doing those kinds of things for the tennis center.”

Councilwoman Willis referred to the center as the “gem of South Fulton”, though it is in need of repair. For Willis, Williams’ visit confirmed that the facility has value and has the attention of many. The renovation of the 24 court facility will cost the city an estimated $600, 000. The city is being considered for a $300,000 grant from the U.S Tennis Association. The councilwoman is expecting renovation to begin within the year.

Willis, on behalf of the Mayor’s Office, thanked Williams for “taking the time out of her busy schedule to make an impact on our youth and our tennis program at South Fulton.”