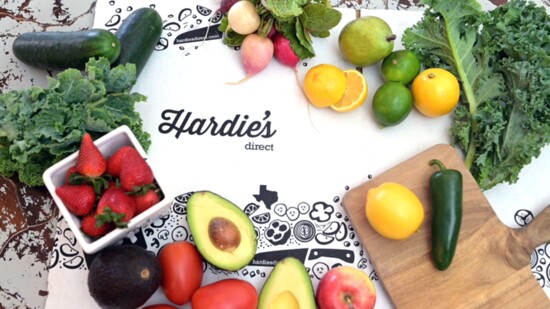 Necessity is the mother of invention.

“Necessity is the mother of invention”, is a well-known proverb often credited to, Plato. In early March of 2020 Greg Rowe, CEO of Hardie’s Fresh Foods, one of Texas’ and America's great family-owned businesses since 1943, knew change was imminent. Rowe, like other executives was beginning to hear stories of a virus hitting the west coast. Rowe and his Hardie’s team had an advantage. They held an existing pandemic plan and immediately began working on potential scenarios. While the team was a few steps ahead, they had no idea of the devastating challenge that was looming. That the United States would be shut down for two weeks in a matter of days was something they could have never imagined.

Hardie’s Fresh Foods is a three-generation, family-owned business. In 1943, John Hardie purchased a single farm-to-market delivery truck to fulfill a need during wartime in Dallas. More than 75 years later, Hardie’s Fresh Foods has grown into one of the premiere fresh food distributors in the Southwest with more than 150 trucks and 163,000 square feet of refrigerated warehouse space across Texas.

In the third week of March 2020, Hardie’s was an institutional distributor with no direct to consumer distribution. As the coronavirus launched into a full on assault in the US the Hardie’s team knew they were headed toward crisis. They also knew the restaurants, hotels, groceries, and communities they served were struggling as well. Rowe, immediately called his team together to brainstorm through their current predicament with three priorities as the focus of their plans: Hardie’s employees, millions of dollars of perishable goods warehoused, and how to save their company, yet serve their customers and communities.

In a matter of hours, a plan was developed to load all perishable goods onto trucks across the state. Current customers were contacted to use their parking lots, which served double duty as a staging area and allowed restaurants to serve curbside meals.

Grocery shelves were empty across Texas. Hardie’s had the fresh vegetables, fruits, eggs, and meats that Texan’s needed to feed their families. The scene was the same from H-Town to Austin, to Big D. SUVs were lined up around the block at these staging areas and the trucks were emptied in less than two hours.

The Hardie’s team knew they were onto something and started with a series of pop-ups over the coming weeks. Social Media was the primary tool to let consumers know where the trucks were located. As the weeks passed the coronavirus proved to be accelerating not dissipating. Concern grew over the safety of families gathering to pick up their food needs. Once again, the Hardie’s team was ahead of the game quickly developing an Amazon quality platform for individuals to place their food order for curbside pick up safely at area distribution centers.

When the pandemic dragged on much longer than anyone anticipated the Hardie's team used this time to create space and innovate. Rowe describes it this way, “when electronics don’t work sometimes you have to just reboot”. With the extra time they had been given due to the shutdown they perfected business systems and fixed flaws in their current strategy. Necessity allowed them to discover a new distribution stream to deliver their exceptional quality fresh foods directly to consumers. They used this gift of additional time to improve and build their new model.

Hardie’s Fresh Foods now owns new smaller refrigerated delivery trucks to deliver directly to your home. They source most of their food from the highest quality farms and growers in Texas and California. When I asked Rowe why families should order from Hardies, his answer was simple, “Because you’re getting the quality products that your best local restaurants serve, delivered at home safely and quickly.”

For Hardie's and for their customers, old and new, a COVID pivot born of necessity turned out to be just the right move.