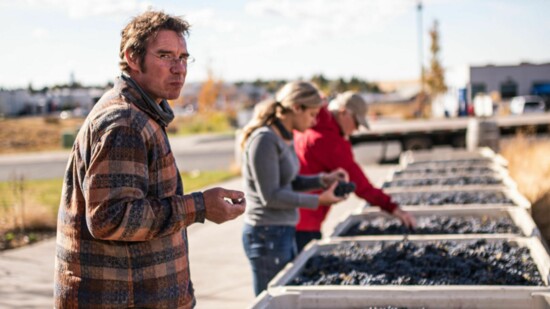 Eat, Drink, and Be Merry

Patrick Merry, Lead Winemaker of Merry Cellars, developed a taste for Wine Country and Culture at an early age.

As a young boy growing up in Billings, family trips to California wine country made an early and pronounced impression upon Patrick Merry. Awed by the sweeping beauty and unique cultural atmosphere in places such as Napa and Sonoma, he credits these vacations with inspiring him to one day found his own winery.

“The aromas of old wine cellars, the architecture and vistas... absolutely beautiful and a contrast to the landscape I was used to in Montana,” he says. “However, it wasn't until I was of legal drinking age that I really began to explore the world of wine. I have always appreciated the differences across global growing regions, appellations and individual wineries.  In my early 20s, I was tasting and learning as much as I could.  Of course, living in Billings, it was not that easy to visit wineries but I would spend a lot of time at bottle shops chatting with folks who were more than happy to share their experiences and recommendations.

After completing his undergraduate degree in computer science at Rocky Mountain College and an MBA at Gonzaga University, Patrick moved to Pullman, WA to pursue a doctorate in computer science. He quickly realized he was now in close proximity to one of the finest winemaking regions in the world: Walla Walla Valley.

“I thought to myself 'what better way to learn more about wine than trying to produce it?'  I made a few phone calls and, in the fall of 2002, experimented with some small batch fermentations in my basement.  At the time, there were no wineries in Pullman or the surrounding communities so I had no opportunities to intern/apprentice or volunteer at an actual winery. Instead, I learned by trial and error. But, in the end, what resulted were wines that were crafted the way I wanted to craft them - not in the shadow of another winemaker or their preferences.”

“By early 2004, I had convinced my parents to help start a commercial (bonded) winery,” he recalls. “Apparently, they liked the small batches from the basement. This is the point where, when giving in person tours at the winery and discussing my background, I really must point out that having two vintages (2002 & 2003) under my belt absolutely did not qualify me to open a winery!  But, sometimes you get lucky and naiveté works in your favor.”

Although their first commercial vintage in 2004 produced under 500 cases, when Merry Cellars opened their tasting room to the public in late 2005, the wines were well received by customers.

“Production tripled in 2005. Staffing the tasting room, attending winemaker’s dinners, pouring samples for potential buyers and communicating with anyone who would listen took its toll on my doctoral studies… I never did finish that,” Patrick admits.

The winery continued on an upward trend. In 2009, they moved production to a new facility that allowed them to expand to their current 5,000 cases per year. Merry Cellars offers a variety of quality wines, ranging from Chardonnay and Merlot, to Semillon and Cabernet Sauvignon.

“We are known for producing a handful of more unique offerings including Mourvedre, Petit Verdot, Roussanne and Malbec,” adds Patrick. “While I am fond of all of our wines, I particularly enjoy our Cabernet Sauvignon, Cabernet Franc and Malbec – hearty, full-bodied and distinctive!”

Visitors are certain to enjoy the expansive tasting room and patio staffed by team members who are knowledgeable and skilled at ensuring a great experience.

“Hands down, the best part of owning a winery are the people you get to meet and interact with,” Patrick states. “Wine is generally a social, celebratory beverage and being able to share and discuss our wines with guests that are purchasing it to enjoy with their friends and family is a very satisfying experience.”

“When my parents and I started Merry Cellars, my goal was to craft exceptional wines that showcase the varietal character of the fruit,” he concludes. “That is, be true to where the grapes are grown and not overshadow the nuance of the wines with too much oak or over-processing.  Even though we have grown ten-fold from where we started, we still employ the labor intensive process of manually punching down the fermenting red wines three times per day and very little of our production is automated.  This allows us to really stay connected to the wines during the fermentation and aging process.”

More than anything, Patrick and the Merry Cellars team love to have fun with their customers…and remember that you don’t have to be a trained sommelier to enjoy a glass of wine.

“We don’t take ourselves too seriously and love to get to know our guests. One thing I absolutely hate is a pretentious tasting room.  It’s just wine.  Sure, you can debate its merits and the nuance of character but if you like it, that’s the most important thing.”

·  2-4 tablespoons of honey, sugar, molasses to sweeten to taste

Place cloves, orange peels, cinnamon stick, cardamom and star anise into a pouch made from cheese cloth and tie shut with butcher’s twine.

Add wine, spices, apple slices to a small saucepan and heat over low heat for 30 minutes or longer. For larger batches, a crockpot on low works well. Be sure to avoid heating to a simmer or boil as this will boil off all of the alcohol. Remove spices according to taste. Sweeten to taste.

Mulled wine can be made well in advance and can be optionally served with an orange twist and/or a cinnamon stick for garnish.