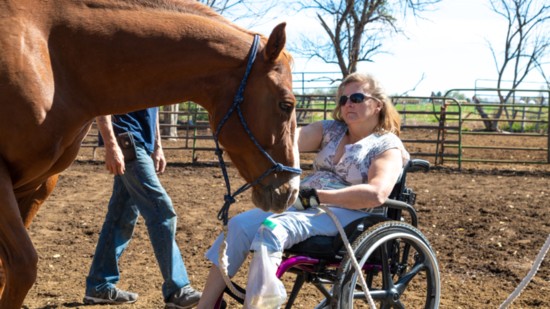 “God must think I’m tough,” Tonja Sullivan says. “Life is hard. But none of that matters—God has me. He has my back and my front…He has all of me.”

At 53 years old, Tonja’s journey has been many things. Easy isn’t one of them. Hardship and loss have mottled the fabric of her life since infancy.

“We had three houses burn down when I was growing up,” she recounts. Although she has no memory of the first fire, being only 3 months old, she can recall the second and third with haunting detail.

“The second one, I was 5 years old, and I watched most of the house burn. All that was left was the chimney and the bathtub…even the truck in the driveway burned up.” The fire occurred in January after her birthday and Christmas and subsequently consumed Tonja’s brand new baby dolls. She was heartbroken. The third fire struck on her last day of seventh grade. Two dogs perished in the blaze.

These painful events proved to have a lasting effect on Tonja, tailoring her perspective on what truly matters in life.

“Three houses burning down taught me not to collect anything. Material things aren’t important—people are.”

“I was in 23 different schools before ninth grade,” she says. Her father’s job as a journeyman lineman took the family from Indiana to Colorado, back to Indiana, to Wyoming, and to Montana.

“He took the word journeyman a little too serious,” Tonja quips. She settled in Montana after leaving home.

“I was married twice—two boys from the first marriage and one daughter from the second marriage.” Tragically, her first son succumbed to SIDS at just 20 days old.

“His name was Nathan Dean,” she says. “That’s not something you would wish upon your enemy. It’s horrible.”

She worked as a manager at Toys ‘R’ Us for 10 years, opening the Billings store and relocating three times during her tenure. Tonja enjoyed her time in Vancouver, Washington, and Oregon with the company, priding herself on always being a hard worker.

“I’ve always been an overachiever. I like to exceed people’s expectations.”

When she eventually moved back to Billings, she struggled to find a job that fulfilled her needs, mentally and financially. After a few false starts, she found an outlet for her tireless and independent spirit: operating her own business.

“I just started building my clientele,” Tonja explains. Beginning with a flyer at church, her sole proprietorship blossomed from four original clients to turning new clients away because she was so busy. The success of the cleaning service carried Tonja for 15 years.

“But, that cleaning service went out of business the day I hit the ground.”

On Black Friday, Nov. 24, 2017, Tonja and her father decided to go for a ride. She kept her horse, Pete, stabled in the barn on her dad’s property in Shepherd and liked to tease him that Pete was the best horse in the whole place.

“Pete’s just a plain horse, a sorrel, but he’s cool,” she says. “We rode out into the field…there was a pivot irrigation system. Pete stopped and snorted at it, which made me laugh because he wasn’t the spooky type.”

Pete was feeling his oats on this particular day. When Tonja attempted to stop him from eating a corn stalk, he popped his head up and threw her off balance. He bucked, and she lost her seat. Tonja landed on a rock, breaking her back in 10 places.

Once her father realized the severity of her injury, he was reluctant to leave Tonja alone, but she urged him to take care of their horses while waiting for emergency services.

“After my dad left, I lay there and talked to God,” she says, “and asked if He wanted me to come home. I thought I would be OK either way if it was God’s will.”

Tonja was airlifted to St. Vincent’s hospital where she underwent emergency surgery. The surgeon determined she had a 1% chance of ever walking again; she was now paralyzed from the chest down.

“I’m still trying to figure out His new purpose for me,” Tonja says. “Everyday is a challenge.”

Her family has been a source of immense support as she continues to acclimate to this new chapter, including her father who lives close by and a nephew who became her first caregiver. Her dad installed hand controls in her truck, which has allowed her to drive again.

“To me, driving is freedom,” Tonja says.

However, the most impactful relationship for Tonja since the accident is perhaps the most surprising: a new man in her life. While in the hospital recovering from surgery last year, an old friend named Dan dropped in for a visit, and they rekindled a relationship 35 years in the making.

“I am most thankful for Dan,” Tonja says. “God put us in close proximity so many times in our lives, but it never worked out until the timing was right.” Dan welded a special bar for Tonja’s saddle which allowed her to begin riding her beloved Pete again, a feat many would have believed unattainable—until they met Tonja.

Tonja is not afraid to admit that life is difficult. Things once taken for granted are now a struggle or simply impossible. But when life threatens to break her, she turns to a favorite Bible verse and finds comfort.