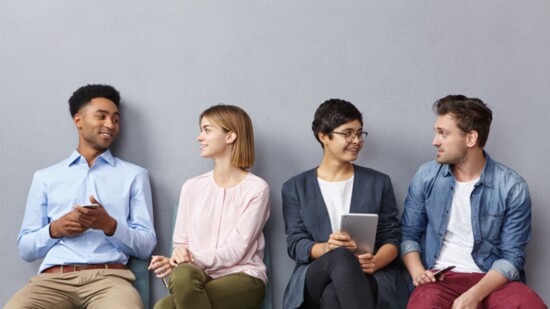 I hold a plate full of lukewarm pasta and broccoli staring at three tables full of 28 people I didn’t know. Where do I sit? I choose a girl who has similar clothes to me and make a beeline. I confidently set my plate down with a quick “May I join you?” as she nods and smiles. There’s an awkward couple seconds of settling in and a “Hi, I’m Mary.” Followed by a “Nice to meet you, I’m Mikayla.” Then some napkin wiping and handshaking. Then, suddenly, we’re talking about our families, her boyfriend, and just a little bit of, what do you think of the Black Live’s Matter movement? I think I made a connection.

After letting his train leave, Jon Levy had two options, sleep on the street or make a strong enough connection to crash on someone’s couch. Well, he could have gotten a hotel, but that wasn’t the point.  He wanted to learn how to build meaningful relationships quickly. These things apply to dates too. How To Get A Date Worth Keeping: Be Dating In Six Months Or Your Money Back emphasizes getting to know a lot of people quickly which requires a few skills.

Take a litmus test, Levy said. You need to know within a few minutes whether this person is going to be a good friend or partner. For me, that meant trying to find some commonality in clothing. For Levy, that meant asking questions like “What’s the wildest thing that you have done on a dare?” Or, to figure out if they’re self-centered or self-conscious, ask them to write an E on their head.

My mom always told me that everyone else is also very nervous. It’s not just you.

Levy could get rid of some of his nerves knowing he would never see the people again, but you can get rid of some of your nerves knowing that you have the power to make people feel comfortable. Everyone loves the person who saved them at the party or at the table where they don’t know anyone. Mikayla and I stuck together for the next few days because we were able to take that first little pressure off each other. I’ve stuck with dates because he made me feel comfortable by asking questions and listening.

Don’t be afraid to move on to the next person. How To Get A Date Worth Keeping says to go on a lot of dates. Meet new people regularly and intentionally and give them a chance. But don’t drag something out when you know they aren’t the one. That isn’t healthy for them or you. It’s the same with friendships. Once you know you’re not going to be friends with that person, try to sit with another person each mealtime until you’ve found a few that you’re comfortable with. Notice a few—don’t just stop at one. People are incredibly interesting.

The first week, meals were awkward… very awkward. The first dinner, we all sat and asked for the third and fourth times where each person’s hometown was. The Monday of the second week, telling some of our most embarrassing stories. Somehow, in the span of seven days, four or five of us decided we get along and now we’re going to be sad to leave.