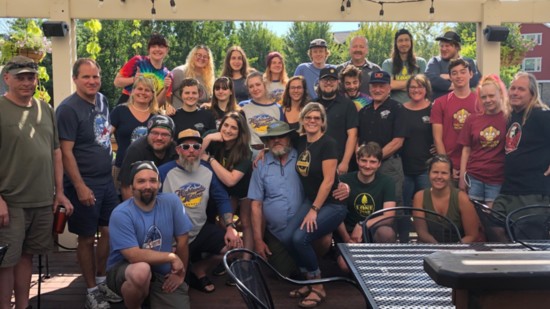 The Evolution of Highlands Hollow Brewhouse

Highlands Hollow Brewhouse (2455 Harrison Hollow Lane) has been at the forefront of Boise’s craft brewery movement since 1992.

It's an icon with another icon hidden inside. In 1968, builder Nat Adams repurposed Boise State University stadium parts into dining room rafters. However, those rafters needed decoration.

“That kind of started the collection of coasters,” Megan says of the beer coasters adorning The Hollow. “A lot of our customers have contributed over the years. When you’re eating, there’s a lot to look at.”

Dishes range from steamed clams to soba salad to the "mess o’ chops." And if you’re headed to a brewhouse, why not get a beer too?

“We have very approachable, wonderful beers,” Megan says. “We have enough rotating that there’s something for everyone, whether you’re new to craft beer or whether you have an acquired taste.”

Ales, stouts and porters flow from Hollow tap handles. Fan favorites include Spoon Tongue, Fiegwild, Thunder Monkey and Hippie Shake. Can’t pick one? Try a flight. Have a favorite? There are $8 growler fills every Monday.

“We have a running joke that [Chris] came with the building,” Megan says. “He used to flip pizzas in the back when it was the Brass Lamp. In 1993, he became the [brewery] apprentice. [Chris] is a one-man operation, and he’s just incredible.”

Megan says several employees, like Chris, have been with The Hollow for 20 years or more.

“It’s definitely a family and a family establishment,” she says. “We’ve been here for so long that this place … belongs to everybody in the community. Everybody has a story to tell about how they used to work here, came on their first date here, got engaged. We tie into the local community as much as we can.”

With three decades of community ties, The Hollow is a local event favorite. The Hollow crew and brews have appeared at Treefort Music Festival, Race to Robie Creek, B’Arc and Brew, and more. The brewhouse also hosts live local music every Wednesday.

“It’s a pretty eclectic atmosphere in here,” Megan says. “If you’re looking to have a great meal and a beer in a down-to-earth environment, you couldn’t ask for a better location.”

2004—The microbrewery opens with a new name: Highlands Hollow Brewhouse.

2017—The Hollow celebrates its 25th anniversary.