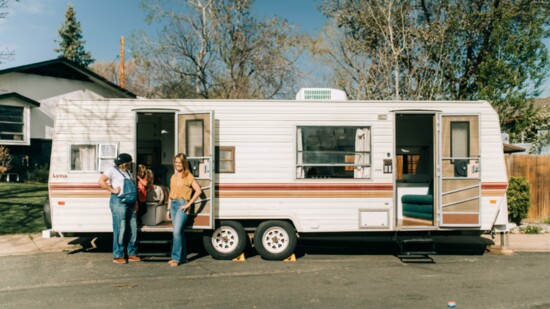 Creativity runs in the family.

Lennon Barnica and Becky Herman are a double dose of boss power as the couple each owns and manages their own Boulder-based businesses. Lennon owns the commercial production company called Wild Manor while Becky runs her own strategy and branding agency, Fadduh. Between working in the same creative industry, raising their four-year-old twin daughters and newborn son, they recently renovated a travel trailer during COVID as an expression of their interests.

The project started as a quarantine escape plan for them to safely travel with kids in tow. They were in part inspired by Lennon’s time adventuring in her grandfather Lyle’s 1976 Apache pop-up camper, while Herman recalls family trips on her father’s sailboat along the east coast.

They chose a 26-foot 1988 Fleetwood Lynx trailer and named him “el abuelo” (Spanish for grandfather) after the patriarch’s in their families who they were very close with: Becky's Dad, Joe, and Lennon's Grandpa, Lyle. The trailer’s sunset logo (designed by Colorado-based designer, Emilie Druss) represents the story they tell their little girls about their late granddads.

“We told our girls that after you die you live in the sunset. On nights when we see the sun is setting the girls run outside and send their love to all of their grandpas," Becky shares.

The laborious process to renovate the trailer included gutting the water-damaged interior (Lennon watched YouTube videos for reference), and used her experience in furniture design and space renovation.

“We wanted something we could refurbish and make our own since the modern trailers tend to lack the details and character we love,” Lennon says. “I’m all about giving something a second chance and not buying new and then it ending up in a landfill.”

It was a fast-paced and sleepless few weeks of work while neighbors looked on as the twin girls could be seen perched against power vacs and wood chip piles, while sawing went until wee hours of the morning.

“People often assume we are two girls who don’t know what we're doing. Thankfully, I learned a lot from my Grandpa Lyle. Since my dad passed away when I was young, I was always outside with him, learning woodworking and how to swap spark plugs,” Lennon says.

The end result shows off a thoughtful interior with lots of character. They chose a southwest modern aesthetic referencing New Mexico and the country of Mexico. Colors like teal, cream, and deep reds were inspired by the original paint on the trailer. Their bedding and throw pillows have a more classic style as seen in the couch and the built-in all made from materials that won’t fade with sun exposure.

They tow their customized home-on-wheels behind their Toyota Tundra and have taken him across the west to Vail, Carbondale, Colorado Monument, Moab, Lake Mccaughnahey, Salt Lake and Park City. One of their scariest experiences was getting stuck in bumper-to-bumper I-70 traffic during a blizzard on Vail Pass next to an 11,000 drop. These first few weeks out on the road are referred to as their “trial by fire.”

“We took it out around six times last summer and the girls are in love with it,” Becky says. “It is exactly what we wanted—something fun that we could adventure in as a family and make lasting memories. We're super proud of what we created."

The finishing touches will include a final paint job to the exterior with the words “el abuelo” across the front window, and adding their port as Boulder, Colorado for Becky’s sailing nostalgia.

Camping and sailing as a family are among our most treasured childhood memories,” Becky says. “Getting this camper was our way of continuing that legacy, this time with our own kids.”