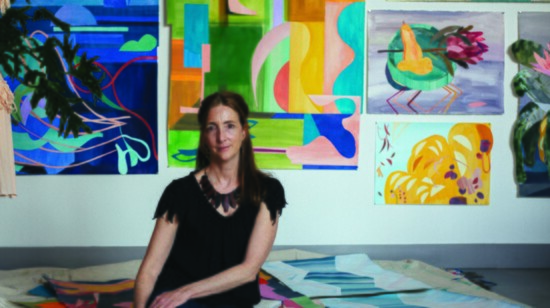 CarolAnn Wachter is the Definition of Art and Design Convergence

"I Want to Design Beautiful Pieces That Last for Decades"

Sitting in her design studio surrounded by and even wearing her work, CarolAnn Wachter talks about all things art and fashion and how she sits comfortably at the intersection of both avenues. For this artist and designer, it’s about being a part of a continuum that deepens the connection between the art and the audience. While people often ask her to choose between art and fashion, she believes it’s comparable to asking if you prefer eating or breathing—they are both essential. In our conversation with CarolAnn, she delves into her inspiration, design process and legacy.

What does it mean to be a designer and an artist in today’s climate? I know you said you think of them as one thing, but as a creative, what does it mean?

The main thing is to contribute to a better circumstance and society for everyone. I'm interested in regenerative ideas and how we can use our resources more intelligently. There's been so much waste with many different industries, but definitely in the fashion industry. It's a responsibility as a designer and an artist to solve problems. I always felt like design was like problem-solving.

When did you know you wanted to intersect art and fashion?

When I first went to the Art Institute, I took a painting class in the summer. I wasn't one of those people that was always painting as a kid. I studied painting and sculpture and then came to fashion later because it was always something in the back of my mind. I thought to myself, “I should be making fabrics. I should be doing something with the way I'm seeing things.” I mostly focused on painting and ceramics. When I moved to New York, I started making hats as I was waitressing. I wanted to make something sculptural, but soft. Someone saw it at a party and knew someone at Barney's, and they got me an appointment. I remember this woman was like, “I'm going to go talk to those buyers and tell them they should give you an appointment to see your stuff.” After five years, I got bored of hats so then I did coats, and it finally grew to a line of clothing, but it took years.

What do you love most about the fashion and art industry in Boulder?

I love the support system. People want to support each other and they want to support local designers and artists. As I have evolved, my clients that bought clothing are now buying the artwork. It’s been awesome to have people support and relate to both mediums.

Let’s talk about your design process. Can you share what happens when you're inspired by something and then how it comes to fruition?

My design process starts both with the silhouette and or the fabric that is followed by sketches and then a muslin on the figure. This then gets translated to a paper pattern and then cut and sewn into the first sample garment. I work with a pattern maker, Sue Ann Patterns in NYC, and she has a few sewers that sew the samples. I watch old movies and also look at deep-sea animals, the shape of leaves, the color of shells, and the history of painting for some inspiration.

I want to make things that will inspire people to tap into their creativity. I would like to leave a body of work that has consciousness with strong feminine forms and shapes that are different from how things have been depicted throughout history. I want to weave together our relationship with nature, ourselves, the feminine, being strong and also fragile. That's our strength—that we can do so much. Women just do so much. They support so many people, they nurture so many people.