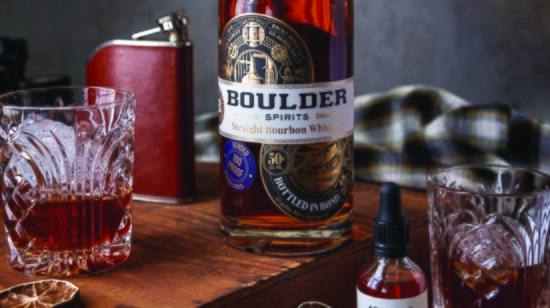 Whether you're cozying up by the fire or looking for the perfect warming beverage to fill your flask before venturing out, Vapor Distillery spirits has a variety of offerings to fit your taste, mood and lifestyle.

For Boulder Spirits’ owner, Alastair Brogan, making American single malt whiskey has become his calling. After immigrating from Scotland to Boulder eight years ago, Brogan set out to make a product that was uniquely American, and more importantly, uniquely Boulder. Two of their standout bottles include two bottled-in-bond; Straight Bourbon and Single-Malt Whiskey. “My ambition was to make a single-malt whiskey,” Brogan says. And that he did. Brogan’s innovative mindset alongside his roots have produced award-winning whiskeys that have no intention of slowing down. The integrity of their process relies on a multitude of elements including the pristine water of the Rocky Mountains coupled with new American white oak barrels, a facet of their operation that sets them apart from international competition. Brogan self-proclaims Boulder as one of the “best” places to make whiskey in the country, noting the arid climate and high-elevation as two defining factors. “The altitude makes a massive difference with maturation, in addition to the spectacular water we use,” Brogan says. Both of their bottles in “bond” are noteworthy because they are bottled at 50% apv (100proof) and follow a distinct set of rules. Each batch of brew is aged at a single distillery during one distilling season for a minimum of four years, presenting them with a federally mandated mark of quality, aka “bottled-in-bond,” which originated as a result of the Bottled-In-Bond Act of 1897. These tactics intensify their defining characteristics and flavor profiles, creating a stronger and abundant product. Their Single-Malt Whiskey, which made its debut seven years ago, contains 100% malted barley (the traditional Scotish way), making it a richer and more hearty spirit. It includes notes of limestone, pencil and orange blossom. Their Boulder Bourbon, a quintessential Boulder beverage, follows a special ratio of 51% corn, 44% malted barley, and 5% rye leading with notes of apple, banana, and bubblegum.

Both their Boulder Bourbon and Single-Malt Whiskey as well as additional booze and mixers can be found at most spirits retailers in Colorado. For more information on where to buy, how to sign up for a tour or tasting at their on-site distillery, and more information visit their website at Boulder-Spirits.com.