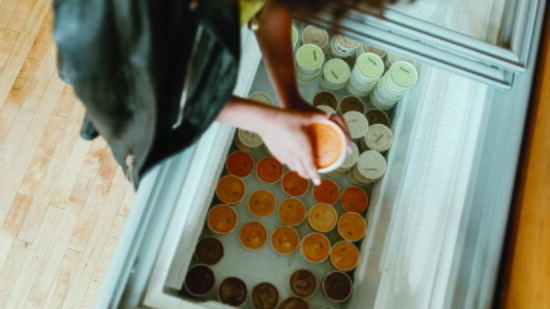 Smith+Canon might just be the best ice cream and coffee combo you’ve ever had.

“The idea behind Smith+Canon was to create an ice cream experience geared towards adults, you know, the people who usually pay for the experience,” says Curt Peterson.

“One of the reasons ice cream appealed to me was that it was something that the girls would be able to relate to and might even capture their imagination at some point,” he shares.

The modern alcove is set with bright wood and glass and has a private patio that sets the stage for a darn good scoop and sip with the whole family. Prior to opening his business, Peterson was an avid cook and developed his own method for making ice cream from scratch. He researched popular flavor combos from around the world and with much experimentation now has over 25 recipes in his pocket.

The shop started after he decided to serve these unique flavors alongside a hot Americano, and that’s when their now-famous affogatos took off. While the standards of choice for ice cream are chocolate, vanilla, and their Foxy Brown (tastes like cinnamon rolls and cheesecake), their more exotic flavors are a must-try. Expect spicy combos like honeydew and wasabi and the fan-favorite of Thai Tea with hints of vanilla followed by a taste of sweet black tea.

Peterson is equally known for his fresh-roasted coffee made from traditional and specialty beans, including green blends and a single origin collection, that offer a variety of flavor profiles, from dark and earthy to fruit-forward and citrus. His comprehensive selection of coffee sourced from producers he has direct relationships with is simply exquisite when blended with a cold scoop of cream.

Their newest addition to the store is a nitro cold brew used to make their Nitro Float that has quickly become their most popular order and can be mixed with multiple flavor combos.

“The community has been amazing, and the City Park and Cheesman neighborhoods are awesome. We have been well received by the area and found a place in the Denver food scene," Peterson says. “And I’m very proud to say that nearly every day we hear a guest declare S+C has the best ice cream they have ever had.”

Smith+Canon offers wholesale coffee (most can be ordered online and shipped nationally) and 100% of their ice cream can be ordered and delivered online. They often service restaurants, hotels, and schools for events and staff rewards. Stay tuned for their featured location at a new hotel on Clayton Street in Cherry Creek where they will supply ice cream for their cafe. And for a java experience you can take home, they will soon be selling French presses, grinders and pressurized cold brew tapped growlers.

Butterbrickle - salty and buttery with a toffee finish

Strawbenero - strawberry habenero (spicy!). Was voted one of Denver's favorite hot foods by 5280.

Smith+Canon is open seven days a week and available for pick-up and delivery.