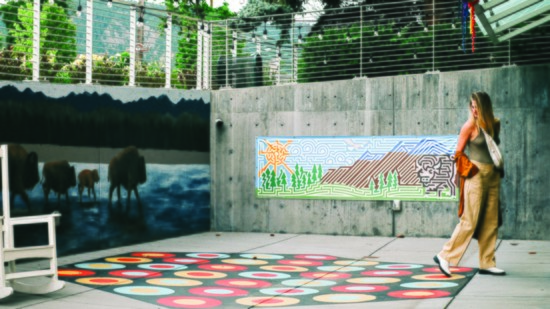 Finding Your MUSE at The Museum of Boulder

Exploring Boulder’s Past Present and Future Through Dynamic Participatory Experiences

After more than a decade of planning and years of fundraising, Boulder’s new history museum opened in the spring of 2018.

Located just two blocks from the Pearl Street Mall, the Museum of Boulder (MOB) is a place where you can learn about Boulder’s history—from the original Native American residents to famous athletes and creative entrepreneurs who call this city home.

The award-winning Boulder Experience Gallery makes local history relevant. A space for people to engage with the breadth of the innovation that was developed in Boulder and its impact on the world.

Visitors are guided through displays, interactives and multimedia experiences that cover the history of Boulder—from the lives of the native Arapaho through key times of cultural, scientific and economic change continuing to the present day.

“Instead of the usual display of Indian artifacts,” says Executive Director Lori Preston, “the museum invited a native curator from the Tribal Historic Preservation Office at the Wind River Reservation in Wyoming to curate a special exhibit.”

Located in a small theater alcove, the multi media presentation Honoring our Roots—written, narrated and animated by the Arapaho and other Native people—is a retelling of their story.

Kids who like to explore, experiment and learn by watching, reading and touching especially enjoy the Playzeum.  With its rainbow forest wall, cabinet of curiosities, and hands-on building activities, they’re able to immerse themselves.

From the beginning of the new museum’s planning stage the Boulder community was involved.  Fueled by a task force comprised of staff, volunteers and local business leaders, “they sought the community’s input into what they wanted their museum to be,” says Executive Director Lori Preston, “and they listened.”

Through some of the highest quality educational outreach in the region, thousands of Boulder teachers, parents and children participate in and have access to quality programs and materials.

At its Comic Book Camp, campers had the unique opportunity to spend a week with professional comic book illustrator Dion Harris to produce their own illustrated comics.

“We’re also reaching out to the blind by creating learning tools with a tactile sensation,” Emily said.

This project brings together Boulder middle school students and local artists who are blind to co-create tactile materials for visitors with visual impairment.

The Museum has been offering its rooftop terrace space to some of Boulder’s yoga and dance instructors who have been displaced since the pandemic began.

“During a time of so much uncertainty,” says Lori, “we want to serve as a community resource, a hub and a helping hand.”

Visit the Museum of Boulder

To sign up for Muse Rooftop Yoga and Dance classes : MuseumOfBoulder.org

The Google Garage, a technology space and space for creative tinkering, can be enjoyed by the entire family.

Martha Maxwell was a 19th century hunter, taxidermist, and feminist. On her hunting trips, Martha often wore this “bloomer suit,” a three-piece outfit consisting of a cotton and linen jacket, knee length skirt, and bloomers.

Only the wealthiest people were able to afford their own horses and carriages. In Boulder, the Clynke family owned the Studebaker carriage and the team of horses to pull it.

While Colorado was not the first westen state to grant suffrage, it was the first to do so by statewide referendum in 1893.

Lucile Berkeley Buchanan Jones’ life story provides insight into the role of the American West as a beacon and a false hope in the history of slavery, social mobility, and oppression.

311 Mapleton at the base of Mt. Sanitas has long had a healthcare focus: before it was the Mapleton Center, and before it was Boulder Memorial Hospital, it was a sanitarium.

From the late 1930’s to the mid 1980’s, children crowded in front of the County Courthouse on the day after Thanksgiving to be greeted by Santa Claus and Miss merry Christmas, who handed out small presents and listened to children’s requests.

When Mildred and Charles Nilon moved to Boulder in 1956, no one would sell them a house. Charles had recently accepted a job as an English professor at the University of Colorado, the first black faculty member at the university. Some Boulderites expected them to move into a segregated neighborhood.

Carpenter won 12 U.S. cycling championships on the road and track, more than any cyclist at the time, along with four world championships.

The story of the now-famous Kryptonics wheels began in secret by a young employee at a Boulder plastics company.

When IBM was founded in 1911, it is unlikely that anyone imagined creating personal, portable computers like the ones we have today. But in 1986, the company released its first laptop, the PC Convertible.

Bob Spoonunter, an Arapahoe artist from the Wind River Reservation in Wyoming, worked across mediums, from painting to beadwork to quillwork, and combined Indigenous and contemporary techniques and influences.

Every November, Cheyenne and Arapaho runners take 4-5 days to run 173 miles from Sand Creek to Denver. They follow the route of Colorado’s 3rd volunteer regiment, which arrived in Denver on December 22, 1864.