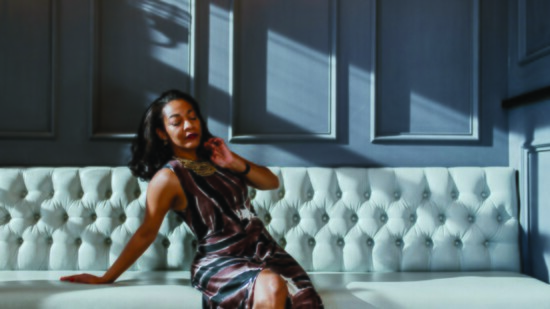 Kat Miller is the unapologetic creator whose videos push the lens towards progress.

“Video production is how I am a leader in this world,” shares Katrina Miller.

The independent creative consultant and video producer has been studying and working professionally in the film and production industry for two decades, directing videography at such celebrated venues as Red Rocks and Boulder Theatre as well as directing at Etown and Fiddler's green. During 2020, Miller’s messages have been expressed through music videos and films regarding both the social inequity across America and the African American history of Boulder’s oldest generation. Although she describes her career trajectory as non-linear, her unwavering draw to video reveals a portfolio of personal experience that aims to unite the collective.

Speaking with Miller, it is clear that her storytelling stems from her childhood as a first-generation American. Her father was African American while her mother was a highly educated nurse practitioner from Panama who raised her and her siblings by herself in Widefield, Colorado. Miller celebrates the fact that she was raised with a deep connection to her Afro-Latina culture. Merengue and Reggae music were the soundtrack to her youth while her mother encouraged intelligence to be their gateway to opportunity. Miller was always a creative type, performing in plays and singing in choir. Journalism, too, had piqued her interest, and after the tragic loss of her older sister she stepped into the role of documentarian, making sure to capture life’s most fleeting moments.

Miller would eventually make her way to CU Boulder to receive her bachelor’s degree in broadcast production and journalism. As a post-graduate, she worked for local creative agency Peoples Production and became a volunteer for the Boulder International Film Festival (BIFF) in 2011, which is when her career really took off. Her role evolved from crew member to a leading production role where she has created videos for a range of clients, including the Museum of Boulder and the Chef Ann Foundation. Another rewarding relationship for Miller has been working with the Unity of Boulder Church for the past 10 years, which includes running the video department on Sundays during their livestream service and teaching volunteers from all walks of life how to use professional cameras and improving communication skills while filming live shows.

“It is satisfying for me to watch people grow confidence through learning a creative skill. This work has shown me that the true meaning of leadership lies within helping others around you succeed at their goals,” Miller says.

With years of experience, it only made sense that Miller would build something of her own. Blackat Video Productions (BlackatVideoProductions.com) was born in 2009 and has since become a hub for both her passion projects and creating for clients across the U.S. This past year, Miller debuted some of her most poignant work to date.

When Covid hit, Miller saw the beloved venues she calls home become settled with dust. Her powerful short video “ISO Boulder” documents empty theatres and an eerily quiet CU campus that is a stark contrast to the typically bustling city. During the Black Lives Matter march across town, Miller released a music video in partnership with artist Pedro Silva featuring his song “New Me” that plays over striking images of the white and melanated crowds of Boulder community.

“I felt so much solidarity. I felt seen and heard in that moment,” Miller says. “I have never seen so many smiles on so many people of color in Boulder.”

Most recently, Miller has been working on a film "This Is [Not] Who We Are" (ThisIsNotWhoWeAreFilm.com) that explores the gap between Boulder’s inclusive self-image and the lived experiences of its Black citizens, both past and present. One notable subject in the film is Boulder local and historian Glenda Strong Robinson who was present at the marches led by Reverend Dr. Martin Luther King, Jr. in the 1960s and has been a key member in organizing local events for Black History Month. She is also an impassioned minister for The Second Baptist Church in Boulder and is featured in this month’s issue of Boulder Lifestyle for her continued work in the community.

Zayd Atkinson is another memorable name in the piece whose story about being racially profiled and had a gun drawn on him by the Boulder Police while he was picking up trash in his yard in 2019 reveals the racial inequality across Boulder. Ultimately, the piece aims to take transformative action in order to achieve more equity.

Another film Miller is working on is “The Silence of Quarantine,” which was pitched to her by Robinson as a way to bring the seniors' plight to the forefront. Paired with a small locally supported grant, Miller began to tell the impactful subjects’ stories, including Mother Elmira Davis, a 91-year-old resident of Boulder, who is both warm-hearted and enthusiastic, and who can be seen smacking a tambourine in the video while gospel music fills the room.

For Miller, staying connected to the Black community in Boulder means a connection to her own history.

“What we have had to endure over these 400 years has never broken us; rather, we have transcended into this new millenia with resourcefulness and wisdom, albeit, scarred from the treachery of racism,” Miller says. “I am cased within this brown skin, and I am very proud of it because of the legacy of resilience and beauty and strength that it holds. It’s another reason why I am happy to do this work to uplift my community to be a part of that legacy.”

While balancing motherhood, artistic expression and a freelance career during Covid, Miller recognizes her 20 years in Boulder that have been deeply shaped by her current community. And although this visual poet is often working behind the scene her impact is anything but discreet.

On Location with Kitchen Upstairs

Upstairs is a sexy, evening cocktail lounge. This chic party space is located right 'upstairs' from The Kitchen American Bistro in downtown Boulder on Pearl Street. Equal parts hospitality, warmth, and the most robust cocktail list in the Rocky Mountain west, Upstairs Cocktail Lounge gives reason to celebrate. Recognized by the James Beard Foundation, creativity knows no bounds for the genius mixologists Upstairs. It’s where classics are reimagined—Old Fashioned, Negroni, Vesper, Manhattan—and new flavor bending cocktails are mastered with playful presentations. A wood-fired oven at Upstairs sets the stage for savory, small plates of food that pair beautifully with bright libations. Guests come Upstairs to relax and leave worries behind while indulging in an incredible line-up of cocktails, exciting new dishes, and stimulating conversations with a partner.

When their doors opened October 1 ,2013, Cedar & Hyde had a vision to find a space a bit off the beaten path that would eventually become a destination, a space where locals could feel comfortable shopping, hanging out, shootin’ the breeze and perhaps sharing a libation or two. Since then, the business has grown into two spaces, one for Home Goods, the other for Women’s Apparel and Accessories and an extensive web presence. They offer thoughtful curiosities unique to Boulder from small artists and designers across the globe, with a focus on goods made in the U.S., Italy, Denmark and Japan.

Rachel Comey’s Fall collection reflects the Cedar + Hyde community's general desire to create their own reality, one that takes the tried-and-true aspects from the past and brings them forward in a comfortable and fondly hopeful way. Her work transports you. It’s a time capsule of textiles that feel familiar and bittersweet.