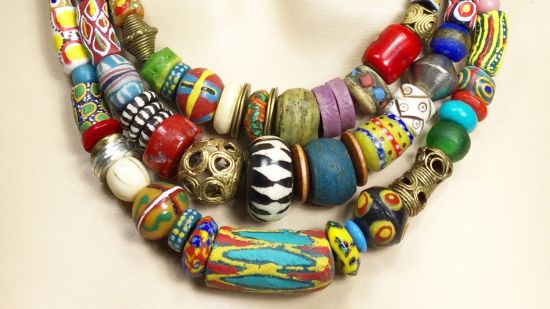 BASED ON AFRICA’S AGE-OLD BEAD INDUSTRIES

Rod Wimer, a self-described creative, is a versatile, fashion-forward artist who has established a reputation as a talented and thoughtful fine arts painter, specializing in abstracts and mixed media collage compositions.

An Idea is Born

Rod spent his childhood in Africa, where he was raised by missionary parents. The seeds of what would become AfricanEkoezJewelry were planted in 2013 when Rod came across an old stash of African trade beads his parents had brought back to the States with them. His mother gave Rod the beads to craft necklaces for each of his nieces for Christmas that year.

The response to those original necklaces from family members, friends and friends of friends was overwhelmingly positive. People in Rod’s immediate circle were so impressed by these early efforts that they encouraged Rod to continue creating African bead jewelry and sell the pieces on Etsy.

Before starting this new venture, Rod did his due diligence, researching how to source authentic African beads so he could purchase beads directly from the makers—families in Africa—and he actually found African bead makers who were already selling the individual beads on Etsy. Rod successfully negotiated a wholesale arrangement to give him access to genuine African beads to incorporate into his distinctive, one-of-a-kind pieces that make up his custom jewelry line.

“I had read online that China makes a lot of knock-off African beads, and when I saw the difference in quality between the actual, authentic African beads versus the Chinese reproductions, I quickly realized there is no comparison between the two.”

The Search for Authentic Items

Rod’s research revealed a rich heritage of bead making that is a revered, time-honored traditional craft in Africa, particularly in the renowned Krobo region of Ghana and in the Ivory Coast. This skill is taught and handed down from generation to generation, each bead painstakingly made, one at a time.

Describing the glass bead making process, Rod notes, “The whole family ends up getting involved because it’s basically an assembly line process where each family member has their own specialty and assigned job, allowing each family to turn out thousands upon thousands of beads each year.”

African beads are made by entire families over generations so that each family develops their own styles and designs, giving the finished product what Rod calls “a unique, rustic, handmade quality that can’t be duplicated [in mass production] because handmade beads are individually made ... giving them a totally organic, bohemian look.”

“African Ingenuity” Went Green Long Before It Was Considered Hip

African beads are made from green, recycled materials, a factor Rod immediately responded to saluting, “African ingenuity in using what they have around them to create these gorgeous beads.”

African beads are made from powdered glass the Africans obtain by collecting scrap glass of all kinds, often used beer, soda and pharmacy bottles, the latter often being made in a variety of colors, particularly hues of green and blue. The bead makers take advantage of the fact that these recycled pharmacy bottles are already dyed and separate them into piles based on color and then proceed to pound them into powder using a variety of techniques. Dyes are added to the plain powdered glass to create a rich assortment of colors.

Clay tray molds with shaped holes in them are filled with the powdered glass and then a Casava leaf stem is inserted down through the glass to form the hole inside each bead. The clay trays are placed into a kiln and after firing, the glass has melted to form the beads, while the Casava leaves are burned away to ash, leaving glass beads with holes in their centers.

A slurry paint is made from glass, and the beads are hand painted with designs created by each family, then the beads are fired in the kiln once more. The process is labor-intensive and time-consuming. Many of the designs used are purposely based on old Venetian trade beads that came over to Africa for centuries as part of the African bead trade. These glass beads are made in a part of Ghana known as the Krobo region, from which the beads take their name: Krobo glass beads.

Rod notes that beads are especially important to the Ghana people and their culture.

Bead makers in Africa soon realized there was an increasingly large demand from international jewelry makers for African trade beads, so it has evolved into what Rod asserts is a “reproduction, green industry repurposing materials that already exist, which the Africans are turning into beads they ship across the world.” According to Rod, this new market for handmade African beads on a global scale has had a vital economic impact, creating a self-sustaining business model that provides “continual jobs for people in Ghana and Ivory Coast.”

In addition to glass Krobo beads, Rod uses African brass beads, also known as “lost wax brass beads,” in his handmade jewelry creations. This style of bead is made by members of the Baule Tribe on Africa’s Ivory Coast. The process for making these brass beads is similar to that of making the glass ones, in that both are based on reusing existing materials.

Describing the brass bead production process, Rod explains, “They gather old metals, brasses and coppers—whatever they can get their hands on—and melt it all together to form brass beads.” Molds are made from mud and ash and a syringe is filled with the melted wax, which is then pushed out of the syringe, creating strings that are used to form the beads.

The wax beads are then placed into a lump of clay that is allowed to dry and then the clay shell is filled with molten brass—an amalgamation of brass, copper and other metals. When it has cooled, the mud is chipped away to reveal a delicate bead with an intricate filigree design.

This method has been known to be in use for well over a century. Rod theorizes that African brass beads have been created using this same technique “probably as long as syringes have been around.”

Rod uses a wide assortment of African beads sometimes blended with semi-precious stones from the Western U.S., including agate, jasper, turquoise and others. As Rod makes clear, his jewelry is crafted with a definite purpose: “My goal is to create something that is posh and head-turning but also still affordable.”

Triple-strand necklaces are Rod’s No. 1 sellers, something he attributes to the fact that “they are unique and one-of-a-kind; they make a big statement and are big head-turners.”

Rod feels Etsy provides the perfect platform for his African jewelry designs because “Etsy is the world’s largest handmade marketplace.”

Save on Your Purchase From Rod's AfricanEkoezJewelry on Etsy

To purchase pieces from Rod’s unique wearable art collection, visit his Etsy shop AfricanEkoezJewelry today. Readers of this article are offered a special discount of 15% off any purchase when they enter the promo code SAVEONCART (must be in all caps!).

I am a passionate writer with a natural curiosity about the people, places and events that make Charlotte The Queen City, a rapidly growing metropolis with a rich history, a fascinating present and a boundless future already in the making, shaped by the rich tapestry of creative individuals who make up our community. An accomplished writer with over 20 years of experience, I...
Read More In My Profile