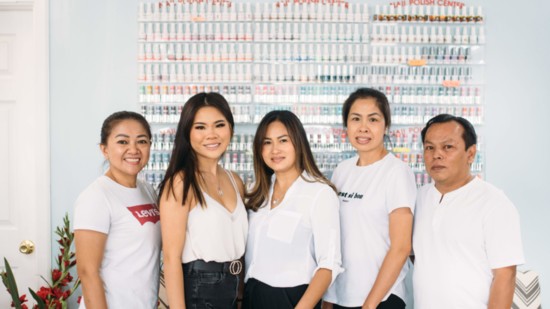 The Story of Diep Nguyen and Tiffany’s Nails and Spa

Diep Nguyen, owner of Tiffany’s Nails and Spa in Boulder, often tells her children that they need to mimic the duck to achieve success. From the surface, the duck appears calm and relaxed. But underwater, that same tranquil duck is constantly paddling against the current, working hard every day to ensure it isn’t swept down the river.

It’s an analogy that Diep, aka Tyffanie, understands and values deeply. And just like the paddling feet of the duck she works to emulate, there is much more to her story—and the genesis of her salon—that exists beneath the surface.

In 1984, 5-year-old Nguyen fled Vietnam with her younger sister and father. A Lieutenant with the French and U.S. armies during the Vietnam War, her father, along with his Allied comrades, were actively hunted after the fall of Saigon.

“My father had no choice but to flee Vietnam and risk our lives for freedom and a better future in America,” Nguyen says.

Leaving behind her mother and three of her sisters for fear of attracting attention and arrest as a large emigrating group, they boarded a small fishing boat and headed east towards the Pacific Ocean. They were what have come to be known as “boat people”—refugees in a dangerous, historic mass exodus.

From starvation and dehydration to the weight of uncertainty as to when—or if—help would find them, to say the journey was harrowing would be an understatement. Nguyen’s craft was rescued by a French naval ship after 27 days at sea. Nguyen lived in a Korean refugee camp, then a second camp in the Philippines, for two years before arriving in America.

“Thinking back on our perilous journey, it gave me a new perspective on life,” she says. “I could have easily died in the Pacific Ocean, yet I am here today.”

After growing up in California, Nguyen moved to Boulder and instantly fell in love with its beautiful landscape and friendly people. Having worked in her father’s nail salon for many years, she was inspired to open her own in 2004.

Nguyen takes deep pride in the personal relationships she’s forged with her clients over the years. She sees her clients as true friends and treats them like members of her own family. Her salon is imbued with a deep sense of community—a place where people can not just get a beautiful set of nails, but unwind, relax and bathe in the warmth of human connection. From making house calls to providing free nail and spa services to women working to get back on their feet after hardship, Nguyen and her business are both full of immeasurable heart.

Adapting to the restrictions caused by the pandemic is a challenge that Nguyen has met with her signature calm and positivity.  A combination of her grateful outlook, extraordinary work ethic, unique perspective and inimitable local relationships has meant that Nguyen’s business has made swift, ardent changes to ensure health and safety, including plexiglass barriers, strict daily cleaning routines, early appointments for the elderly and more. And as she has throughout her life, Nguyen approaches the future with hope.

“I have faith and believe that we will continue to thrive into the future,” she says. “We’ll take it one day at a time and things will work out.”

“I tell my children that I walked on muddy roads with my bare feet when I was little. But now they do not have to walk on the mud because I have worked hard to lay bricks for them to walk on instead.”

“The advice I would give to new entrepreneurs? Do it. Go for it. If you have a hard work ethic and treat people with love and respect, the opportunity is great.”

“Put love into everything you do first, then everything else will fall into place.”