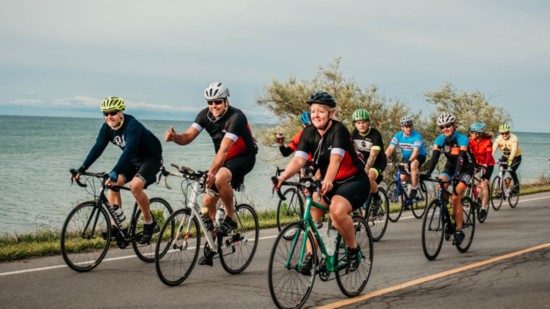 “So that’s the route! Eh?” Bicycle trips in English-speaking Canada involve a lot of “eh’s” (loosely, the Canadian form of ‘right’ or ‘OK’) as well as almost unbelievable friendliness. At the launch of our five-day exploration of Prince Edward County with Randonnée Tours of Vancouver, we met with the company’s Area Manager, Ed. He wanted to make sure we understood our cycling maps and was willing to take as long as it took to mention “must-do’s,” such as visiting Slickers, his favorite ice-cream shop, which, the next day, became our favorite as well. Ah, for a cone filled with Campfire Cream just now!

Randonnée, now in its 25th year, specializes in self-guided, customized active cycling, hiking, walking and multi-sport tours in Canada, the U.S., and several European countries. McKinney grew up in Prince Edward County and still has numerous relatives and friends there (including a nephew who owns a perfect end-of-trip celebratory brewpub in Picton!) We decided to visit Prince Edward County after reading intriguing stories in such outlets as Travel & Leisure, which included it in its 2015 list of Best Places to Travel, describing it thusly: ‘Cross Montauk, NY, with California’s Napa Valley circa 1970, and you get Prince Edward County, a tiny wine-producing region that’s becoming a haven for creative types.” About two hours east from Toronto and four hours west from Montreal by train or car, it’s an oenophile’s paradise, with over 40 vineyards and an ever-increasing array of breweries and top-notch bistros - along with fabulous cheese-shops to complement those libations.

It has recently become a mecca for Torontonians, (less than two hours by train from Belleville) and increasingly, Quebecquers, seeking weekend escapes from the big city. With the many orchards, provincial parks and Lake Ontario beaches, antique shops, art galleries, playhouses and music venues, those fore-mentioned vineyards and tasting rooms and wide, well-marked cycling paths, bicyclists are finding the area more and more attractive. In fact, Prime Minister Justin Trudeau and his wife were famously reported cycling in the County in 2017. Randonnée’s itinerary for its Prince Edward County trip is designed for cycling about 25 miles per day, with mostly flat terrain and a few moderate hills. All breakfasts and one dinner are included, as well as high-end Cannondale rental bikes and luggage transfers, which are expertly and efficiently done by a local taxi service.

On Day One, we arrived at the Belleville train station and booked a taxi for the short, scenic drive to Wellington, where our Prince Edward County adventure would begin. While Randonnée terms the Prince Edward County tour as a 6-day itinerary, the first day is usually just for arrivals and if guests like, they can go for an easy warm up ride. As our train arrival was mid-afternoon, we just walked around the rather idyllic lakefront village of Wellington. After a surprisingly good Mexican dinner at the very popular La Condesa, we strolled over to

Rotary Beach, a lovely silky-sand expanse overlooking Lake Ontario. We were mesmerized by the heavy mist draping the lake, blending the sky into the water. The next morning, we walked down two blocks to Ideal Bike, where we met with George, who equipped us with hybrid Cannondales, blissfully light and easy to manage. I was thrilled to be able to lift mine with one hand - a first for me. George patiently went over our route maps provided by Robbin, and even added in some more suggestions.

After leaving George, we took off on the Millenium Trail, a former railway converted into a multi- use, mostly flat, gravel-paved 30 mile long cycling trail, heading towards Belleville. Passing by an alpaca farm, weathered barns, dense groves of bushes and purple chicory flowers as far as we could see, we hopped off our bikes to gaze at a small pond with a family of swans gliding across it, a blue heron and ducks beside them. Throughout our trip, thickets of blaze-orange tiger lilies were ubiquitous, and we started noticing beautiful barn “quilts” on the sides of barns and other buildings.

Clossen Road is known for its many wineries. We made a quick dash into several to peruse the tasting rooms, but decided to venture over to nearby Greer Road to have delectable gourmet wood -fired pizzas (available summer only) and some tastes of excellent wines at Norman Hardie Winery, an acclaimed, award-winning winery since 2003. Hardie, originally from South Africa, told us that the limestone filled region in the County mimics the terroir in Burgundy, France, producing excellent Pinot Noirs, Chardonnays, and one of his specialities, Calcaire.. Back in Wellington, we rode again on the nicely shaded Millenium Trail, bordered by leafy trees, dense bushes and more thickets of tiger lilies and chicory. A small skunk surprised us, ducking into the underbrush (thankfully not spraying!,) the first live one either of us had ever seen. On to Sandbanks Provincial Park, with three exquisite Lake Ontario beaches, superb cycling and hiking trails. It is a major tourism destination for Canadians and U.S. residents from northeastern states. The soft, powdery sandy dunes are rather astonishing, like those at ocean beaches.

We stopped by Waupoos Estates Winery, the first to open in the County, with gorgeous, flower- bedecked grounds (very popular for weddings,) along with a petting zoo, antique shop, chocolate and gelato shop, cidery and a swank tasting room. Waupoos is noted for its exceptional reds, whites and dessert wines. Lake on the Mountain Provincial Park, where we had lunch on our last day, was a true highlight, offering an absolutely breathtaking, inspirational view from 197 feet above Lake Ontario with views towards the Bay of Quinte, the Glenora Ferry and the north shore of the County. At the Miller House Cafe, with divine flatbread pizzas and hearty craft brews, every outdoor table offered a postcard-worthy sight, and I thought, “now THIS is the perfect spot for a marriage proposal dinner!”

We took in the free Glenorra Ferry ride to the other side and back just to say we did, and then cycled back to the small city of Picton, the county seat. Picton is charming, welcoming, reminiscent of my childhood vacations in places like Cape Cod and Cape May. It was the perfect place to end our journey, especially with a couple of IPA’s held high at Prince Eddy’s brewery, the one owned by Robbin McKinney’s nephew. The Randonnée Tours 6 day, 5-night trip is offered between May 1 and October 31. A valid passport is needed for U.S. residents to enter Canada, but no visa is required.