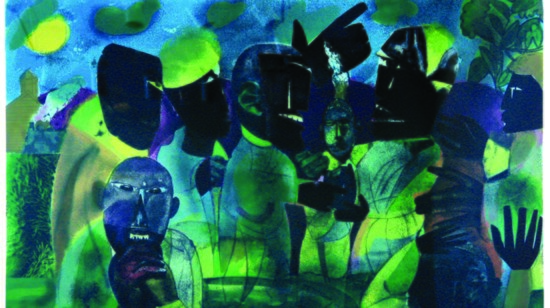 A Half-Century of Cultural Discovery

Pat Diamond and his wife Judy live in South Charlotte. Pat earned his undergraduate and graduate degrees from Boston University where he and Judy met and eventually married.

A New Beginning: A Lifelong Commitment

The newlyweds had exchanged vows mere days before embarking on a planned trip to East Africa that would forever forge a lifelong commitment to searching for museum-quality artwork created by African American artists. Finding and acquiring their extensive collection of art was just one piece of the process necessary to bring these works to the attention of fine art connoisseurs, educators and the public alike so these artworks could be studied and appreciated.

To this end, the Diamonds worked to establish relationships with leading museum professionals across the nation and were introduced to and formed lasting bonds of friendship with many of the most well-known and critically acclaimed African American artists of the day.

A Legacy of Giving Back to the Arts Community

Throughout his early, prolific career, Pat simultaneously forged strong bonds within the business and arts and cultural communities in Chicago. While working as Chicago’s Deputy Commissioner of the Department of Housing, Pat received an invitation-only appointment to the Leadership Advisory Committee of the Art Institute of Chicago. Pat also served as a board member of Chicago’s Southside Community Arts Center

Pat’s commitment to supporting the arts has continued here in North Carolina as he has served on the boards of numerous art institutions including the Reynolda House Museum, the Mint Museum of Art, the McColl Center for Art & Innovation, the Greater Charlotte Cultural Trust, Arts North Carolina and Charlotte’s Arts Empowerment Project.

The Pat and Judy Diamond Collection

Paintings, drawings and lithographs from the Diamond Collection have been featured in more than 20 museums, galleries and art centers across the United States. The collection has been exhibited in many of the most prestigious art institutions in the land including the Whitney Museum of American Art, The Art Institute of Chicago, The Black Academy of Arts & Letters and the National Gallery of Art to name but a few.

Memoir to be Released in February 2020

The academic and artistic journey that began for Pat Diamond as a 5-year-old child growing up in the impoverished, segregated South of the 1950s has culminated in his recounting of his personal triumph in his new book, “The Incredible Joy of Collecting African American Art: My Journey from Frog Town S.C. to the National Gallery.”